Top of the OUP list for me has to be DIsorder: Hard Times in the 21st Century by my dear colleague Helen Thompson. I read the draft – it’s fantastic, making sense of current geopolitical upheaval.

I’ll be very interested in Keith Tribe’s Constructing Economic Science: The Invention of a Disciplein 1850-1950 (although it’s a ridiculous price so I won’t be buying it.)

Given my past career, I’ll also be very interested to read Simon Potter’s history, This is the BBC: Entertaining the Nation, Speaking for Britain 1922-2022. (I have an article forthcoming in Philosophy about the need for a public service option in digital territory.)

Another history title of relevance to political economy issues is Rachel Bowlby’s Back to the Shops: The HIgh Street in History and The Future. The Digital Continent: Placing Africa in Planetary Networks of Work by Mohammad Amir Anwar and Mark Graham looks quite interesting, and is also open access. The well-known CIty guru Andrew Smithers has The Economics of the Stock Market out in March (although it doesn’t yet seem to have a page on the OUP website). 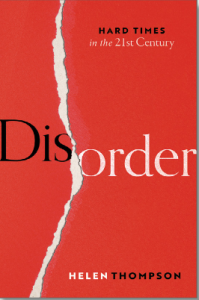