When I picked up Anne-Marie Slaughter’s book Renewal: From Crisis to Transformation in Our Lives, Work and Politics, I was expecting something big picture about the state of the world – why capitalism is failing, precarious work, inequality, populism and the like. After all, she’s a noted public servant and foreign policy expert. It’s not that at all. Indeed, it is a highly personal reflection on her own failings at a time (2017) when the organisation she led, New America, was plunged into a public crisis. The crisis was an allegation that the think tank had parted ways with an employee who had been critical of Google, a $20m donor to its coffers, to avoid offending the company. As always, the reality was more complicated, but as she explains, Slaughter mishandled the response. She goes on to diagnose her limitations as a leader and how she went about addressing them.

Through this lens, the book draws lessons about national political leadership – and it is very US focused, so while some of the challenges are common to all the leading industrial democracies, some are highly specific. As well as the personal focus, which is only partially successful to my economics-oriented mind, it also has a religious thread that left me completely cold. And it is indeed peculiarly American to have to make a declaration of religious faith to have the authority to comment on the state of the nation.

Anyway, ‘renewal’ lit is big in a number of countries now. This is a decent read and as a human being I found the personal story interesting. But I wasn’t convinced about the attempt to project the personal onto the political in this case. 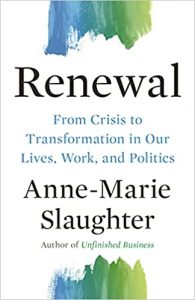