I’m not a big reader – or fan – of leadership-type books (see the previous post) but picked up Margaret Heffernan’s Uncharted: How to Map the Future because I’ve read her FT columns, met her a couple of times, and admire her. She’s also a great friend of the Bristol Festival of Economics, which alone is enough to warrant buying and reading her book.

The book was published early in 2020 so written before the pandemic and as a result qualifies as prescient. For the characteristics she identifies as important for effective strategic thought and action have become far more widely debated since then.They are the importance of resilience and trading off some efficiency for robustness; the role of decentralization and permission for people across an organisation to try and err; the importance of enough deliberation to elicit the preferences and the information held by a wide range of people or stakeholders; and the vital role of trust in effective organisations. I was nodding my head as I read along. Despite the title, there isn’t much about forecasting the future, mainly a scepticism about the usefulness of the exercise.

It isn’t a particularly analytical book – these are my categories, not hers. You could contrast this with Radical Uncertainty, which touches on the same themes in a highly analytical way. Rather, Uncharted assembles many examples to make these arguments. This does make it a good read – lost of stories, lots of her own experience. I enjoyed it. (Tim Harford did too.) 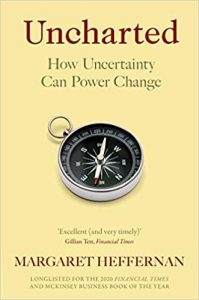