Thanks to a long train journey, and despite the fact that one of them was packed with boozing and singing Newcastle United supporters, I finished two books: the 25th anniversary edition of The Economist’s View of the World and the Quest for Well-being by Steven Rhoads, and Brett Frischmann’s 2012 book Infrastructure: The Social Value of Shared Resources. This comment is about the first of these, a book I was surprised not to have heard of before: not only do I read a lot of books about economics, but it was also a best seller.

It’s easy to see why it did do well. It’s well-written, clear and jargon-free. It starts with basic concepts that become second nature to an economist but others find somewhat unnatural: opportunity cost, marginalism and the role of economic incentives. The book goes on to a section about government and markets, the economic concept of efficiency (ie. Pareto optimality and the welfare theorems) and then equity and externalities. It ends with a section on the ‘limits to economics’, namely well-being, non-fixed preferences and political economy. This is all key basic material and useful concepts to non-economics people taking public policy course.

Having said that, I didn’t much like the book because it equates ‘how economists think’ with ‘they think markets work best, governments fail except where there are specific externalities to fix’. I spent the first two parts of the book (not literally) shouting at it: no, that’s the Econ 101 version! That’s not how we *really* think (or at least not all of us). I liked the third part much better but would argue that economics has much to contribute beyond these specific ‘limits’.

To give a specific example, there’s a section in the first chapter, ‘Engineers versus Economists’ which argues that engineers, well, over-engineer big civil projects, whereas economists armed with cost-benefit analysis prevent this wasteful spending – or ought to if only political vanity didn’t get in the way. This is just too over-simplified to be useful to public policy students. First, for all the compelling evidence of over-budget and late big projects, infrastructure is necessary so just saying no to engineers is useless. Secondly, politics rather than engineering alone play a big part in building concreet white elephants. This is a subject one can’t discuss without political economy. I teach this each year and would ask my students to go out of their way not to read this section.

So all in all, some good things about the book but not one I’ll be using. Needless to say, I like my own text on this area (Markets, State and People) better 🙂 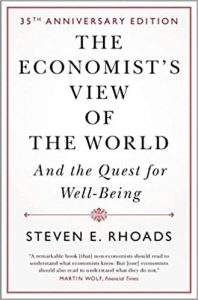