I finally finished The Free World: Art and Thought in the Cold War by Louis Menand, all 700+ pages of it. I did enjoy reading it, an account of Cold War, mainly US with some French, intellectual and cultural history that is both panoramic and detailed. It ranges from philosophy, art and music to the 60s counterculture, tracing the way the domestic and international political context shaped some of the currents across the waterfront of ideas. Having said that, I find it hard to sum up the book and put this down to the fact that I had to read it in relatively short chunks over a long period because it’s just too big to carry around or even hold for long. I do think it would have benefited from some editing out of the detail. For example, every new character in some circle, from art criticism to linguistic philosophy is introduced with a biographical note – where they grew up, what their connections with to others in the circle, who slept with whom. We are treated to some snippets about their personality: Pollock always drank too much, Sartre “did a great Donald Duck impression.”

Having said that, the book certainly deserves the adjective magisterial. The famous cultural figures, from John Cage to the Beatles or Kerouac to Baldwin, are located in a milieu that helps explain their art and also somewhat downplays it. For it is evident that Sherwin Rosen’s superstar effect has long been in operation: people who are only slightly better than their rivals at whatever they do become the main focus of general attention and fame, for reasons of serendipity, or connections.

On reflection, perhaps the reason I’m left with quite a bitty impression is less to do with its length and my feeble biceps than with the inherent difficulty of the task Menand set himself. Maybe the 2nd half of the 20th century is just too close to our own lives for the focal length to be set in a way that gives a single coherent image rather than this impressionistic account. Maybe covering everything from A J Ayer’s philosophy to the success of the New Yorker is too large a territory. Having said this, perhaps it doesn’t matter either. It’s beautifully written and there are 700+ pages of fascinating detail. 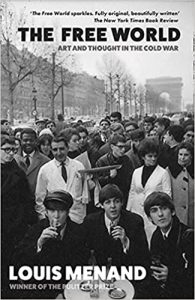