Jan Eeckhout’s The Profit Paradox: how thriving firms threaten the future of work is a very good read. It’s a game of two halves (yes, someone in my household is permanently watching the football at the moment).

The first half (in fact parts 1 and 2) is a nice synopsis of the reasons the economy (mainly the US but others are covered) tend towards a) concentration across many markets and hence b) diverging fortunes of companies and their employees, and the places where people live. This covers the features of digital technology, superstar phenomena, agglomeration economies – these are familiar to anyone who has been keeping up with the literature, but I applaud how well the book is written. Hooray for an economist who can write so engagingly. This section documents the evidence on concentration and mark-ups, the growing divergence between companies in terms of productivity and profits, and the corresponding decline in the labour share as outsourcing of routine occupations (call centres, cleaners, admin) has progressed. Eeckhout argues that there is assortative matching such that pay and conditions are polarising between people with high value jobs in frontier firms and people with low value added jobs in their contractors.

The book’s focus is on the implications of market power for people as workers, rather than as consumers – although it also notes the excess pricing power too. In sum, it reduces wages, both directly through monopsony power in individual labour markets and also because of the the macroeconomic consequences: with so many people in contingent work with low pay, aggregate demand is inadequate. (Some) firms are doing well but the economy isn’t. And this is the heart of Eeckhout’s argument: “The effect of the tide of market power is lowering wages across the economy.” I find this link persuasive. While there are many economists looking at the elements of this story, the way they are combined here is enlightening.

The second half turns to the much harder question of what to do, starting with an affirmation that for all the disruption the new technologies are a good thing (this chunk reminded me a bit of my own Paradoxes of Prosperity, which first came out in September 2001 and not surprisingly was hardly noticed).

The recommendations boil down to: enforce labour standards; mandate more data openness; and beef up anti-trust policies. In particular (under the last heading) stop big tech making more acquisitions, regulate them rather than break them up (so as not to lose beneficial network economies), and assess market impacts in the round rather than firm by firm. (Tricky to implement but I do remember that in my days on the Competition Commission, as it then was, we often had to include a section of the report on ‘Features of the market’ – problems in concentrated markets do often spread beyond an individual transaction).

I’d agree with all these suggestions in the book but they add up to a meta-suggestion: find the political will to change the institutional architecture so that it delivers fairer outcomes. The technological tides won’t retreat but the effects depend on what institutions confront them. Is Lina Khan’s appointment in the US a sign of lasting change? 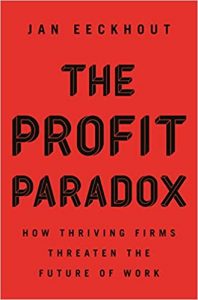