This week’s read has been Adrian Pabst’s Postliberal Politics, with the cheery subtitle The Coming Era of Renewal. It’s hard to believe the past 18 months, on top of the post-2008 real wage stagnation, and the Brexit/Red Wall voting phenomena that there will not be some kind of realignment? This book advocates for a community-centric economic and political model, focusing on family, dignity and local identity. It’s an appealing vision, in the same vein as some other recent books by economists (Mark Carney, Minouche Shafik, Raghuram Rajan, Sam Bowles) but with a focus on the politics rather than the economic policies. I’m suppose I’m enough of an old-fashioned (pre-post) liberal that the communitarian flavour makes me a bit uncomfortable, as does the religious thread, while agreeing intellectually that excessive individualism has been highly problematic.

The book is short (and wonderfully jargon-free) so it doesn’t bother with the always-unsatisfactory bullet point lists about what are the top 10 policies needed to get from here to that future political renewal. Indeed, it concludes: “Building  a new consensus requires more than a political and policy programme. It has to be anchored in a public philosophy to outflank both technocracy and ideological extremes. A public philosophy expresses the shared ends of political action.” Quite. The public philosophy guiding policy and politics since the late 1970s has crumbled yet lives on in zombie form in many arenas of policy-making. This is a thought-provoking building block in an alternative that might take some time to rise out of the rubble. An interesting read. 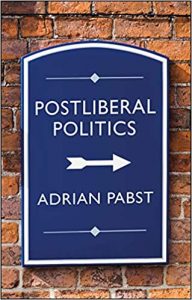 Speaking of outmoded public philosophies, I also polished off Qiu Xiaolong’s Hold Your Breath China. This series of detective novels isn’t all that well-written; I like them mainly for the flavour of Shanghai life. However, the culprit in this one, whose plot concerns air pollution is clear: GDP. Who would have expected the flaws of GDP to be the central issue in a crime novel?