Almost a decade ago I gave a lecture which opened with this question. I was probing the influence of economists in government, for good or ill. (This discussion is picked up in my forthcoming book, Cogs and Monsters.) Perhaps I’d been influenced more than I realised by having been on the economics reporting beat with Gillian Tett in the 1990s, she for the FT and me for The Independent. We were all very impressed by her PhD in anthropology, as fieldwork in Tajikistan seemed very exciting and adventurous.

Gillian’s new book, Anthro Vision: How Anthropology Can Explain Business and Life, starts with that fieldwork, including the less thrilling part about being trapped in a hotel room as civil war raged outside. It’s a rattling good read, as one would expect from a top journalist. The book is divided into what she describes as the core principles of anthropology: the need to make the strange familiar, to make the familiar strange and to listen to what is not said. These add up to an effort to develop some objectivity about the group or society under investigation – I was struck for example, by the parallel with the outsiders who foresaw the financial crisis in Michael Lewis’s The Big Short. Gillian’s reputation was totally confirmed by her early warnings about impending crisis.

At the same time, the methods of anthropology, especially ethnography or participant observation, bring the researcher close to the objects of study. The book is adamant that use of data and computers alone fails to deliver important insights. I couldn’t agree more, both in terms of determining economic policy and in terms of research. I love applied economics but one of the joys of my work now is working in interdisciplinary teams using different methods.

The book has loads of interesting vignettes about the use of anthropology, particularly in business, where there seems to be more of it than I had realised. Some that particularly struck me: teenagers seem addicted to their mobile phones because that is the only space left where they are free to roam and hang out, now that their lives are so constrained in the physical world. As Gillian points out, when we were young we wandered around by ourselves, met friends, drifted around the shops. For various reasons, all of these spaces have closed to today’s adolescents.

Another is the account of the engineers of the Internet Engineering Task Force, which oversees technical management of the internet, voting on changes to rules and protocols by – humming. Votes are taken by which group hums the loudest. Lockdown has made decision-making most unsatisfactory. 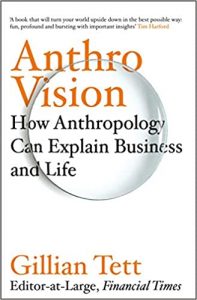