Reading Jonathan Levy’s Ages of American Capitalism: A History of the United States has been quite a commitment: over 700 pages of text, plus notes, in hardback. The sheer weight militated against my taking in the grand sweep if its ambition, as I had to read it sitting at home propped on cushions. Nevertheless, it was well worth it.

As the title suggests, the account is organised into different ages: commerce (early days from late 17th century, and the role of slavery); capital (post Civil War to Fordism and the Depression); control (New Deal & postwar golden age); chaos (1980 on). The organising idea is the changed relationship between state and business in each of the eras, but importantly that the state, and political decisions, always ultimately determined the character of capitalism. The private sector – titans such as Morgan and Ford – clearly made a massive contribution to shaping US industrialisation through their business model choices, union-bashing and personal force of will; but they were not writing the story of capitalism on a blank sheet of paper. Government decisions and political forces constrained them and tamed them. And in each of the eras, there were distinct political visions, starting with the conflicting Hamilton and Jefferson visions.

This political economy framing made the final section the most interesting to me, given the many straws in the wind indicating that the 2020s will prove another junction between eras as belief in the “Magic of the Market” (Chapter 19) evaporates. This isn’t to say the Biden presidency will form the template for a new era – and indeed the book stops with the post-GFC recession – but rather that the Reaganite/Thatcherite order has become a disorder.

As in any Big Book, there are lots of interesting details and eye-catching turns of phrase. The superior logistics of the Union Army for example, involving vast military contracts for provisions and even railroad-building: “A highly functional political economy of corruption helped the Union win the war.” The early signs of the importance of the changing geography in US economic development as NASA and companies such as IBM opened facilities in Alabama in the late 1950s, signalling the rise of the sunbelt. The role of JP Morgan in creating forward-looking corporate valuations in the late 19th century merger movement.

There are points at which it seems like the book isn’t 100% in control of the economic terminology. For instance, Levy frequently uses a phrase about deposits ‘pyramiding into New York’ as if it’s a technical term of art. And there are a few scattered graphs that don’t add much to the words – the reproduced paintings are better illustrations of the points being made, be it about the frontier or 1960s consumerism. These are minor quibbles.

The book ends: “I have emphasized that American capitalism is an especially forward-looking economic system, in which expectations of the future play a prominent role in determining the present.” I think this statement is always true, and that it’s the balance between optimism about the future and nostalgia for the past that shapes an economy. The same page later lights on what is particularly distinctive about the US: “its pronounced historical amnesia.” And as Levy concludes, now is the moment for a better imagined future to come into play. Over to the politicians, Biden and the not-yet dormant spectre of Trumpism. 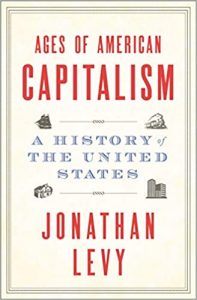