Why, oh why, can’t I write like Michael Lewis? Surely everyone who reads his books and dabbles in writing themselves must ask this. I read his latest, The Premonition: A Pandemic Story, more or less in one sitting. It has the same pattern as his other excellent explorations of big, systemic things going wrong, The Big Short and The Fifth Risk. They are all superb books to set public policy students (and practitioners) as they concern the interaction between government and private decision-making: group-think, blame games, information and separating the signal from the noise, accountability, the role of expertise in democracies, of fear – and the rarity of clear thinking, moral fibre and courage. And they are all fantastic reads.

The Premonition concerns the lack of preparedness for the pandemic in the US: the politicisation of the CDC, the hollowing out of the public health system in previous decades, the malign ‘medical-industrial’ complex, and finally the toxic Trump presidency. It has some great characters, as in the other books independent-minded people who for whatever reason are not overly swayed by others around them in how they think or act. It has also given me a great addition to my lexicon: malignant obedience. 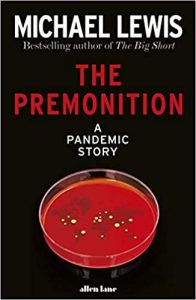 Less so – as it’s one for afficionados – Katrina Forrester’s In the Shadow of Justice about the influence of John Rawls. I was of the Rawls and Nozick generation of undergraduates – their magisterial books were reasonably new then. But I found this heavy going, philosophy academese not being a light read. This is another book that has had rave reviews but I struggled with, so I’m sure the fault is mine. Having subsequently read some of the reviews, it’s clearly an important book. I found this one helpful in telling me what to make of it.

One thought on “The cost of malignant obedience”