I just read the new Princeton University Press edition of Vannevar Bush’s Science, The Endless Frontier, with an interesting introductory essay by Rush Holt. I don’t think I’d ever read the whole of the famous Bush document before, and it was interesting to see how he made the pitch. The rationale is all about the impact of research on living standards, jobs, progress. Famously, though, Bush advocated for expanded government support of basic research carried out independently and governed by scientists themselves. He argued for the early release of wartime results for the benefit of all (interesting given the contrast with the UK – perhaps we would have stayed stronger for longer in computing if the British government hadn’t kept the Bletchley work secret for so long).

I was also interested to see the essay starts by insisting on the need to include the social sciences and humanities in the body he advocated:

“It would be folly to set up a program in which research in the natural sciences and medicine was expanded at the cost of the social sciences, humanities and other studies so essential to national wellbeing.”

He also argued for a single agency to ensure disciplinary silos could be averted. Later in the essay, however, although the latter point is satisfied by Bush’s proposed structure for what became the NSF, he omitted the social sciences and humanities, believing they were ‘too political’.

Rush Holt’s essay notes that a competing proposal by Senator Kilgore wanted a new agency to serve the country’s economic and social needs more directly, and to ensure research funding was distributed around the US. And argues that the Kilgore vision was correct on this point. Holt writes: “Our scientific enterprise is failing to give citizens some importan things they need. These have not been failures of research …. Rather, they have been failures in the relationship between science and the public.” He argues on the one hand for reintegrating the social sciences and on the other for dialogue between scientists and public but also greater scientific literacy. Some research, he concludes, should be directed to social needs, and to regional economic development.

I hadn’t realised that today’s debate about these aspects of science policy dated right back to 1945. Both the Bush and the Holt essays are well worth a read. One of the lessons from the pandemic must be the high cost of not having better integrated social, medical and natural science research. There has been great work across disciplines, on the hoof – it should have been in place to start with. If we don’t fix this now, how on earth are climate change, biodiversity loss, demographic pressures and other big challenges going to be tackled? 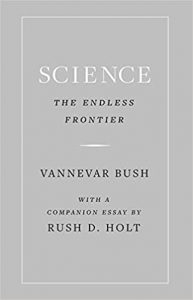