One of the highlights of my career as a  financial journalist was a trip to the Chicago Board of Trade in its open outcry days. It must have been around 1993. I can still remember the physical sensation caused by the explosion of the noise of human voices shouting orders in the huge trading pits as soon as the bell rang. It was an extraordinary experience. But one shouldn’t romanticise open outcry. And as Donald Mackenzie records in Trading at the Speed of Light, one CME trader said to him after the closing bell had rung (this was in 2000): “Look at my glasses. They’re all dirty.” Flecked with spittle from the shouting melee.

I loved this book. I’ve been a keen follower of Prof Mackenzie’s research on high frequency trading since his early articles in the London Review of Books as well as a previous book, An Engine, Not A Camera. Prof Mackenzie describes his research endeavour as ‘material political economy’, and it concerns the interaction between the physics and (literal) construction of financial markets, and specifically HFT, and regulatory or political decisions, or power relations.

HFT is a world which is Einsteinian: the speed of light is the constraint on trade, and what traders (human or algorithmic) know about the market is determined by their physical location and physical connectivity: where are they, to the millimetre; how close to a geodesic curve is their communications connection (and is it fibre optic or wireless or microwave); is it raining (which interferes with certain parts of the radio spectrum more than others); to what extent have they programmed trading activities into hardware (chips and C++) for speed?

I’ve always been deeply fascinated by the physical dependencies and consequences of the online world. For example, I was right to predict in The Weightless World that – rather than the death of distance – digitalisation would enhance the agglomeration effects that concentrated people in certain places (we will see if this changes post-pandemic but I’d still reckon not.) Currently I’m somewhat preoccupied with where the internet is, and with the huge physical investments Big Tech companies have made, the weight of digital activity on climate and minerals.

Trading at the Speed of Light is an amazing, detailed account of why material reality matters for virtual outcomes, and conversely, in the financial markets. Everybody with the slightest interest in modern finance should read it (Prof Mackenzie helpfully flags sections that are technical enough to be readily skipped). The book is based on years’-worth of interviews and attending conferences and visiting remote data centres and masts, snapping photos.

The book describes the arms-race of speed and pushing ever-closer to physical limits. A key interview quotation appears mid-way: “I don’t think there’s any other industry than the finance industry that can pay for it ….It’s mind-numbing to look at this whole industry where you have a lot of people with extended training that spend night and day shaving nanoseconds. Where, if you could put that brainpower to something else, maybe somehthing different……”

Indeed. And yet the HFT we have today is the product of decisions taken by people, politicians persuaded by lobbyists. One of the things I learned from the book is that forex trading remains far more artisanal than share trading, albeit still automated. Alas, this was because of the political power of the banks involved rather than anybody’s deep foresight. Human decisions shape markets shape the world, but the consequences are rarely if ever forseen.

Who knows where it will all end (although, presumably, not well). The book ends by pointing out that ‘material political economy’ is the right lens to turn on both crypto (energy-devouring, CO2-spewing monsters) and the world of Big Tech with its datacentres and algorithmic advertising market. At least in these two cases, regulators are perhaps more aware of the societal challenges than their equivalents were in the early days of algorithmic share and futures trading. But it’s a good while since financial markets served their societies rather than predating on them. 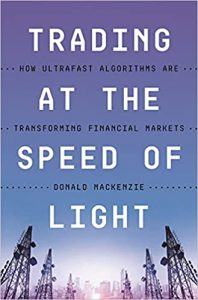