After a 700+ page tome, excellent as it was, I went next for Deirdre McCloskey’s 100 page Bettering Humanomics: A New, and Old, Approach to Economic Science. Her style is something of an acquired taste – I like it, but know some don’t. In any case, there is no doubting the extraordinary breadth and depth of her knowledge (which was on full display in her Bourgeois Virtues trilogy).

This essay is an update on a constant theme through McCloskey’s work, which is the need for a broader methodological approach to economics by economists. The discipline is hobbled by a narrow range of methods, an obsession with one particular style of showy reasoning (often powerful, but often tipping over into ‘mathiness‘ or the cult of statistical significance. Nick Crafts refers to the ‘identification police’, a character everybody who has had a paper rejected by Reviewer 2 because he doesn’t think causality has been demonstrated in the approved way will recognise. The methodological constraints are reinforced by the tyranny of the Top 5 and the insider process for selection that characterises them.

Anyway, I was predisposed to agree with McCloskey in Bettering Humanomics. Her main theme is that ideas and language shape the economy, and economics needs to listen. As she points out, rhetoric has often changed things on the ground in dramatic and sudden ways – we are not deterministic products of centuries of culture. Economies can turn around in short periods – think post-war Germany, Ireland and Portugal, or Thailand and South Korea. Such changes – and many other examples from the impact of advertising to same-sex marriage – torpedo a “notion of preknown preferences derived from utilitarian theory of decision without rhetorical reflection.” The implication is that the kind of arguments about economic development popular among economists based on game theory or some other theoretical structure explain too much: they are too universalist, and ignore the way our actions at any moment are shaped by the expectations of others and the contextual specifics. I cover similar ground in my next book, Cogs and Monsters (out October 12th!).

So, I liked Bettering Humanomics. It’s critical of economics but a critique by someone who knows what she’s talking about and loves the analytical and empirical power of the subject. I think economics is changing, re-embracing the work of economists such as Hirschman and Baumol and Veblen – I hope so. 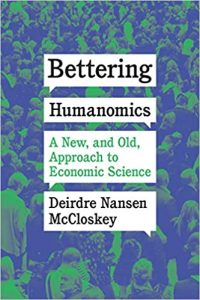