I just read a marvellous 1980 book, Great Planning Disasters by Peter Hall. The first half of the book consists of specific case studies. To qualify, the cases have to have been costly, involved processes of planning by public authorities, and have been perceived by many people to have gone wrong. Those included are London’s third airport saga (indeed), London’s ‘motorways’ (no, they don’t exist),  Concorde, San Francisco’s BART system, and the Sydney Opera House. Also included are two schemes that looked like they would be disasters but turned out not to be: California’s new university campuses and the British Library.

One of the interesting things about the book is having an additional 40 years of hindsight. The London airport saga continues, with Heathrow now having not just a 4th and indeed a 5th terminal but still not an additional runway. Stansted has become London’s 3rd airport, sort of, though we have the bijou London City as well. Concorde alas is no more: I remember still the exhilaration the crowd I was in felt at an open air concert in Kew Gardens felt when it flew overhead toward Heathrow, after the announcement the small fleet would be retired. The British Library has been a clear success. The Sydney Opera House had to have a major refurbishment. But as I ask my students when we discuss cost benefit analysis, do you think it should never have been built: is it an icon or a white elephant?

The second part of the book draws out the themes from the case studies, discussing it from the perspective of the actors and their incentives: affected communities, bureaucrats and politicians. One theme in all the case studies is that major projects take a long time to conceive, plan, approve and fund, and during that time political actors change, as does the zeitgeist. Individuals can have a big impact. One striking example is that an influential and forceful advocate of locating the new British Library next door to the British Museum (where he was chair of trustees) became an influential and forceful advocate of its actual site next to St Pancras when he was made chair of the new national libraries’ board. Technology changes too, costs rise – always – and demand forecasts over decades are almost sure to be wrong, albeit in an unknown direction.

There is no easy answer to the conundrum of how to avoid great disasters. The book recommends taking care with forecasting techniques, having regard to distributional consequences (and how this affects the politics), and communicating the uncertainties. I think the conclusion I draw, having been thinking about this, is that planning big projects is a political, not merely a (complicated) technical, decision. That makes two things important: building enough consensus, and aligning all the interventions that could make a project a self-fulfilling success. Oh, and multiplying the initial cost estimates many times over, except not too much to scare people from approving and investing in the first place. 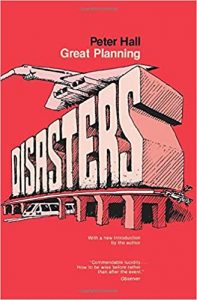