I don’t agree with absolutely everything Sam Gilbert writes in his book Good Data: An Optimist’s Guide to the Digital Future. But this is one of the best books I’ve read about the new world of the data-driven economy and society. Now, I am biased in the sense that Sam is a colleague, a research affiliate at the Bennett Institute. On the other hand he has terrific credentials for writing objectively about what has become a contentious subject, having worked as an early employee of a successful data-driven start up (insurer Bought By Many) and having undertaken academic research into these questions. (It was here at Cambridge and it sounds like it was tough going – sorry, Sam.)

As the book notes, the prevailing narrative in the academic and even policy world is the “surveillance society” one: our privacy is being massively invaded without our consent by evil capitalists who retain all the profits. Regular readers of this blog will know my view that Shoshana Zuboff’s book Surveillance Capitalism is almost literally unreadable, but nevertheless the trope has stuck. Yet, as Sam points out, the data driving targetted advertising isn’t individual data but aggregated behavioural data. The early section walks the reader through how you actually use Facebook to advertise. He also makes the point that people don’t mind their public profile data being used to advertise to them; they sometimes are disturbed by ads that do use behavioural data but – and the book describes how – it is reasonably easy to change settings so it doesn’t happen. Instead you get irrelevant ads.

Does the surveillance capitalism theory matter? Sam argues that it does because it is leading businesses to close, or not start up, because of the regulatory or reputational uncertainty around using data analytics. Analytical tools that helped smaller companies compete with Amazon have been shut down. He says, and I strongly agree: “Allowing your search data to be collected, anonymised, aggregated with other people’s data and put into the public domain is a benefit to society.” I’d probably go further: much as care is needed about anonymisation and privacy, the surveillance trope in its focus on individuals is a neoliberal as can be. The data economy could be a social or a gift economy, not an individualist one: a positive sum game not a zero sum one. The book gives examples of societally positive things that are not happening because of the chilling effect of the dominant debate.

Of course, it’s not simple. But some odd decisions are being taken. One example I learned here is that the German government in 2017 set rules requiring autonomous vehicles to be strict utilitarians: if there is an unavoidable collision, the algorithm must minimise the total number of casualties, not prioritising its own occupants. I thought economists were the last utilitarians of this kind.

The book completely acknowledges that big tech companies need to have legitimacy and their power must be acceptable to the societies in which they operate. That’s certainly not where we are. Their behaviour has significantly degraded their social licence to operate. Sam offers a useful checklist of policy approaches to restore this. I have some ideas that don’t feature here, including the ones we suggested in the Furman review regarding interoperability and the scope for competition in ways similar to open banking. I’m also far less of a fan of the ad-driven business model than Sam is, not that I’d ban it; the drive for clicks to attract advertisers does seem to be at the heart of some of the worst effects of Facebook and Google. He and I would agree on making the ad tech market far more transparent and honest. I’d also consider either an ad tax or a public option: a strong competitor with a different business model which would force competition along the quality dimension.

Having quibbled, this is a terrific book. Knowledgable, thoughtful and very well written too. Also, Sam is a great colleague so I hope you’ll buy his book….. even if (especially if?) you already disagree. 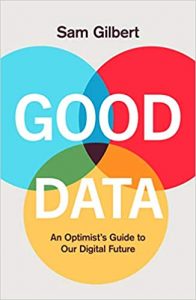 2 thoughts on “Sense about data”