I read Jason Smith’s Smart Machines and Service Work: Automation in an Age of Stagnation because there was a positive discussion of it on Twitter. I’d describe it as a mash-up of Baumol (‘cost disease’) and Marx (‘exploitation’).

The first part of the book is a rant about technology and why today’s tech will not increase productivity. It channels Robert Gordon and criticises economists like Erik Brynjolfsson (or before him Paul David) for arguing there are delays between innovation and the productivity effects they produce.

I have the same problem with this as with Gordon’s magnum opus: it might turn out to be correct that today’s techs have no productivity impact, but focusing only on digital entertainment and communication devices is completely unpersuasive. Vaccines, hello? The wave of biomedical innovation like the development of mRNA vaccines has rested on the plunging cost of gene sequencing, enabled by computation applied to massive amounts of data. Lab benches, test tubes, and also computers. The transition to green energy supply will require large-scale computation to manage storage, networks and grids. Additive manufacturing has many potential applications including printing organs and tissues. These applications are genuinely slow to emerge: large additional investments in equipment are needed, the organisational and ethical hurdles are high, other discoveries might be required to make them economically viable. We’re lucky so much of the prior mRNA research had been done before 2020.

Anyway, the book halfway through then turns to the growth of the service sector, the automation of routine tasks, and the debate about the potential impact on jobs. It looks back, too, at the well-known decline in middle-income jobs and growth of the contingent workforce. Having introduced Baumol’s familiar ‘cost disease’, it then turns to a Marxist analysis. Having never learned Marxist economics I found this quite interesting but heavy going, as it has its own jargon. Still, it is surely right to consider the impact of automation in the context of power struggles, or class conflict.

The book has some sections where it pauses to ask what is actually meant by ‘productivity’, a question of evergreen interest to me. It touches here on the issue of time use and time saving in services, and on activities crossing the production boundary, making it hard to measure ‘true’ productivity. As it points out, many previously household (uncounted) activities became marketed during the 20th century (‘commoditised’), and are often low-pay and precarious. However, the book then veers back to the more abstract class struggle.

All in all, I found the book quite interesting for its novel (to me) perspective, and it is well written. But much of the (non-Marxist) economic literature it draws on will be familiar to many people enticed by the subject matter. What it adds to the technology debate is, quite rightly, the issues of power and deregulation of the labour market,  beyond discussions of gig platforms. But it didn’t tell me anything new about the productivity puzzle. 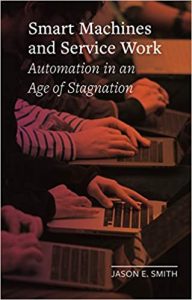