This might sound weird, but I thoroughly enjoyed reading The Plague Cycle: The Unending War Between Humanity and Infectious Disease by Charles Kenny. It’s an absorbing history of exactly what the subtitle says, arguing that Malthus was wrong even when he was right: populations were indeed kept in check in a natural cycle for most of history, but the way this happened was infection, not starvation, when population sizes and densities increased by enough to make human settlements attractive homes for various pathogens.

As the book describes, people found responses to waves of disease: keeping strangers out or confining them; cooking and spices (hotter countries or regions have spicier cuisines). Who knew that, “[M]any spices kill bacteria. Garlic, onion, allspice and oregano inhibit or destory every bacterium they’ve been tested on.” But the significant breakthroughs, allowing urbanisation and modern economic growth through agglomeration, depending on the technological advances that started piling up just as Malthus’ book was published.

I say technological, but some advances were ideas requiring no laboratory. Oral rehydration therapy, devised by Indian doctor Dilip Mahalanabis in 1971, is cheap and simple. “But for its full potential to be realised, everyone has to know about it.” The book tells us that 95% of parents in Kerala know to give fluids to a child with diarrhea, but, “In West Bengal – where Dr Mahalanabis did his life saving work over four decades ago – more than half still give children less to drink.”

As the book goes on to explain, the techniques for defeating disease, from the simple to sophisticated vaccines (although – again, who knew? – Gandhi was an opponent of vaccination), enabled urban agglomeration and globalisation. For all their downsides, these have been the dynamo of modern prosperity: people exchanging ideas (in ways that Zoom etc just don’t make possible). It cites Abhijit Banerjee and Esther Duflo’s finding that infant mortality rates are now lower in urban than in rural areas, an amazing reversal of the historic gradient.

The book ends with the new challenges, from anti-microbial resistance, to sentiment about vaccines and the toll taken by the Wakefield scandal, to the institutional challenges manifest in tackling Covid19. While The Plague Cycle represents work predating this pandemic, it could not have been published at a more timely moment. There will be more pandemics. Antibiotics and antivirals are ceasing to be effective because of over-use and mis-use. Continuing basic research has to be funded. I hope everyone will read this and do all they can to get across the message of eternal vigilance in this ‘unending war’. 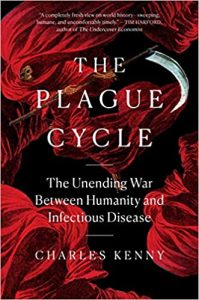