I’m afraid I was underwhelmed by The Power of Creative Destruction by Philippe Aghion & his co-authores Céline Antonin and Simon Bunel. The book falls between the two stools of textbook for econ courses and overview for the general reader. It is based on course notes and has that tone (and charts/tables/referencing of the literature), but all the technical apparatus students would need has been removed. Professor Aghion is of course a terrific economist who has published lots of excellent papers on growth and innovation. However, that too is a downside here, as the book is the Aghion view of the world rather than a broader survey of the economics of innovation and growth.

The oddest aspect of this is his contrast between the Solow neoclassical growth model and the ‘new paradigm’ of Aghion-style Schumpeterian growth. Set aside this claim to novelty, which might cause many other Schumpeterian economists to raise an eyebrow; there is nothing here about the competing workhorse approach of endogenous growth models. Paul Romer makes it to the footnotes, Paul Krugman’s increasing returns models not that far, Ken Arrow too isn’t mentioned. Joseph Stiglitz fares best out of the prominent thinkers about markets, growth and development in the context of increasing returns. The book is more or less an account of Prof Aghion’s own research, and his own papers (excellent as they are) are the most-often cited. So while accepting the importance of creative destruction and new ideas, the absence of much about information and ideas is pretty glaring. There is a chapter about R&D but little about the economic models endogenizing it.

I could quibble about other features too, such as relying on patents to measure innovation, but it’s this missing aspect of the dynamics – the scope for endogenous, self-fulfilling or -averting phenomena – that seems a particularly big gap. The discussion of intellectual property lacks any nuance: it is simply asserted that patent protection is essential. Of course it is, but that isn’t the point of the present policy debate, which is exactly about whether the right balance between patent-protected monopoly and broad access to new ideas has been struck. 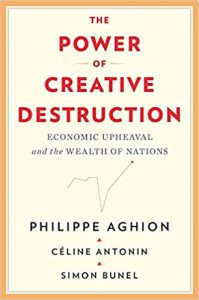 On the other hand, I also read Carlo Rovelli’s Helgoland and warmly recommend it. It sets out his view about quantum phenomena as manifestations of the fact that reality is relational: nothing is experienced, perceived, measured, or understood except in relation to everything else. “Every vision is partial. There is no way of seeing reality that is not dependent on a perspective. …. The actor of this process is not a subject distinct from phenomenal reality, outside it, nor any transcendent point of view; it is a portion of that reality itself.. …. Relations make up our ‘I’, as our society, our cultural, spiritual and political life.”

This appeals strongly to my intuition and echoes the argument of my forthcoming book, Cogs and Monsters, one of whose key threads is the point that economists can not stand outside the society they seek to analyse. Even the economists are endogenous. 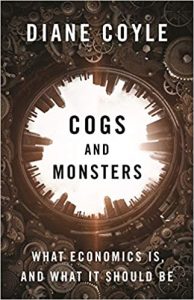