Veblen: The Making of an Economist Who Unmade Economics by Charles Camic isn’t a biography of Thorstein Veblen so much as an intellectual history. Although there is biographical detail, its purpose is to situate Veblen in his milieu, not only from an immigrant midwstern farming family but also in at the birth of academic economics in the United States in the later decades of the 19th century. This was an era when universities were being founded, some on the model of research universities imported by men who had studied in Germany. It was also a time when economics was in flux, with a progression from classical economics – and Mill’s textbook – to institutionalism on the German historical model to the new marginalism.

Camic makes two central arguments. One is that – contrary to the firm impression shaped by the only major biography to date – Veblen was far from being an outsider. On the contrary, he studied with the leading economists of the day (such as John Bates Clark, or Richard Ely), spent years on the faculty at the University of Chicago where he edited the Journal of Political Economy, wrote many academic articles and was invited to give lectures at other top departments. He was, Camic very convincingly argues, at the heart of the academic economics of the day until late in his career. Only at the end did he fall off the top rungs of this ladder, and then because of his personal entanglements and not for any intellectual reason.

The other claim is that Veblen’s economics, and indeed his entire intellectual formation, was due to an environment in which the idea of evolution pervaded everything. Hence it was not surprising that the evolution of institutions should play such a major part in Veblen’s economics. It was not because he was an outsider that Veblen condemned the ‘nonproductive’ rich in Theory of the Leisure Class, but because he considered American social and economic institutions had evolved in a parasitic, an extractive, direction. Consistent with this argument, when he wrote about economic theory, he firmly condemned the new marginalist approach as ahistorical: how could the marginalists fail to see that the marginal productivity of the rich nore no relation to the value they could extract from the economy? One might today readily agree the same point about the monopoly capitalists of big tech, but the subtitle of the book is odd – far from Veblen successfully unmaking economics, the marginalists went on to hold sway until relatively recently and are hardly down and out even now.

Nevertheless, this is a really interesting book, in effect a sociological study of the formation of the top US economics departments still dominating the profession globally today, the years when they separated from other disciplines, and were characterised by a pluralism reflecting the ferment of debate within the profession. It left me thinking what a shame it was that Veblen had left the academic world before the end of his career – he ended up writing for popular publications – because although individuals rarely turn the tide by themselves, he might have influenced what became a close-to-monoculture in economics (to borrow the evolutionary metaphor). For example, in his final academic post at Stanford he published (in 1908 and 1909) significant articles – unknown to me before this – about the “intangible assets of the community” and their role in production, the “storehouse of knowledge”. How modern this sounds. But he was kicked out of Stanford for an indiscreet relationship, and that was that. I have read Theory of the Leisure Class, and found it almost unreadable. Nevertheless, I’ll be toddling off to have a look at these two late articles.

I enjoyed reading Veblen – one for anybody interested either in the man himself or in the history and sociology of economics. It certainly succeeds in over-turning the prevailing myth that Veblen was an outsider. Iconoclast perhaps, but from within the heart of academic economics for much of his career. 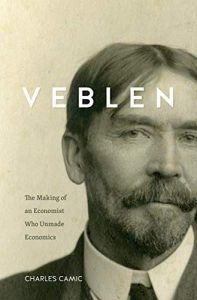 10 thoughts on “Veblen, institutions and ideas”