I’m a fan of Deirdre McCloskey, but accept that her writing style is a bit marmite – it’s always clear but she has a rather arch tone which some readers don’t like. Some of her books are also rather long, and the three in her terrific Bourgeois Era trilogy, The Bourgeois Virtues, Bourgeois Dignity and Bourgeois Equality, fall into this camp. They repay the time required, drawing as they do on McCloskey’s extensive reading and research (to get a flavour of how extensive, look at some of her posted course syllabi here).

Now, however, anybody unwilling to commit the time to the whole Bourgeois Era trilogy can read instead this new summary version by McCloskey and Art Carden, Leave Me Alone and I’ll Make You Rich: How the Bourgeois Deal Enriched the World. Where Acemoglu and Robinson’s Narrow Corridor takes inspiration from Hobbes, this book is inspired by Locke, and argues that liberty is the key to the great enrichment of the past two and a half centuries.

At a time when the mood – and reality – of the times is swinging toward state intervention in the economy – and rightly so, given the potentially Hobbesian world to which the combination of market power and pandemic have brought us – it’s all the more important to keep an open mind and take these arguments from economic liberty seriously. Don’t be put off by the blurbs on the back from Stephen Davies of the IEA and Matt Ridley. Besides, the sweep of McCloskey’s historical knowledge is such that the book is just a good read (if you like the tone), and a fraction of the length of the trilogy! 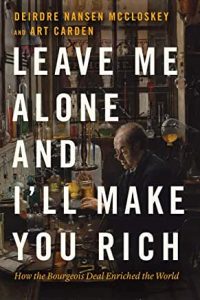