As welcome distraction from the misery of not being able to see any close family at Christmas after all, I’ve read (late, I know) The Narrow Corridor: How Nations Struggle for Liberty by Daron Acemoglu and James Robinson.

The basic argument is well known. Inspired by Hobbes’ Leviathan, they argue that nations experience a dynamic whereby there is a sort of saddle path (a narrow corridor) between not enought government (‘absent Leviathan’) and too much (‘despotic Leviathan’). To stay in the corridor (‘shackled Leviathan’), there needs to be a balance of power between government (which has to be strong enough to be effective) and society (which has to be strong enough to prevent government tipping off the path in either direction. Slightly oddly, they call this the Red Queen effect after the on-the-spot race between Alice (in Wonderland) and the Red Queen – odd because it is never made completely explicit that they’re referring to a dynamic process rather than an adequate balance. I infer the former, but it’s implicit in the examples that make up the bulk of the book.

For there is a whistle stop tour of pretty much all of recorded human history. I’m not sure this works well, although at least the book is only a third of the length of Thomas Piketty’s Capital and Ideology, which came with its own tote bag. I have to confess I started to read the latter but was not distressed to find it quarantined in my office in the March lockdown. The first section of that is all history. It’s fantastic that top economists have discovered history of course, but it’s difficult to get the right focal length – what’s the right amount of detail to inform readers without it becoming classic economic imperialism? I did enjoy reading the book, but personally, I’d have edited down The Narrow Corridor’s capsule histories.

Other quibbles. The book seems to demonstrate the struggle for stability and absence of conflict at least as much as for liberty, despite the subtitle and blurb emphasising liberty only. Hobbes was more in the territory of order versus anarchy. There’s even a hand grenade on the paperback cover. And, having spent most of the book presenting the three Leviathans as exhausting the possibilities (there’s a neat diagram), the ‘paper Leviathan’ is introduced to deal with countries that govern despotically and at the same time incompetently – think some Latin American or African states. And perhaps some formerly-shackled Leviathan countries heading in that direction…..

Having said all this, well worth a read, as well as a useful reminder that there have been dark times before and yet things go on. 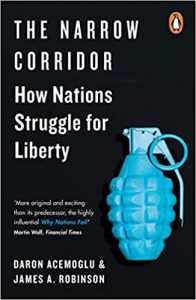