For the usual kind of slightly random reason, I re-read David Edgerton’s excellent book The Shock of the Old this past week (having read it when published in 2006 as he was an interviewee on an Analysis I was presenting [http://news.bbc.co.uk/nol/shared/spl/hi/programmes/analysis/transcripts/27_07_06.txt]). It’s generally aged very well, and is of course a necessary corrective to technology hype. The main argument is that the history of technology tends to be told as a a breathless account of inventors and shiny new inventions, rather than the more representative but complicated story of economic conditions and uneven diffusion and use. So at any moment in time, many overlapping technologies serving the same basic needs will be in use around the world.  What’s more, the same hype gets recycled. For example there’s a quotation from George Orwell in 1944 complaining that people were over-hyping the ‘death of distance’ due to the airplane and radio, when the same claims had been made before 1914!

It is undoubtedly true that different technologies overlap in use, and indeed there’s quite a large economics literature about diffusion and the need for complementary investments before inventions and innovations deliver productivity benefits.  To this extent, Edgerton is railing against an imaginary foe. He is also very sniffy about the concept of ‘weightlessness’, which he misinterprets as a claim about declining employment shares for primary and secondary sectors of the economy. It is not this, but rather a description of the distribution of value added in the economy, and one that has been borne out fully by trends in the past 2 or 3 decades.

The other point that he seems to me to under-play – oddly, given his emphasis on the importance of contest for the use of technologies – is that they are all social. There are countries unable to provide a reliable electricity supply not only because they are low or mid-income but because they do not have the institutions to support the complex supply arrangements: not just sub-Saharan Africa but also California. Or take the book’s example of the Pill, which it argues is an incremental change in contraceptive technologies. Yes and no. Each of the Pill’s characteristics – women in control, reliable, and not requiring a fitting by a doctor – might seem a small shift from condoms, douches, IUDs and diaphragms, but together they did deliver a compelling new method and a radical change in social relations.

Having said all this, The Shock of the Old is a bracing corrective to techno-hype, something certainly still needed. 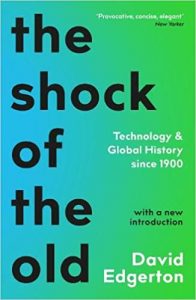 (This is the new edition – I have the old one so haven’t read the new intro.)