I’m biased about this one: my dear friend Professor Ruth Ben-Ghiat at New York University has a new book out. It’s Strongmen: How They Rise, Why They Succeed, How They Fall. The book looks at how personal authoritarian regimes come about in democracies or  through democratic processes, and covers strongmen ranging from Hitler and Mussolini, Mobutu and Pinochet, to Putin and Trump. It’s an illuminating approach because the book discusses their common tactics and features across time and space – for these types learn from each other – and also tracks changes, for instance in the use of different types of media over time. The book also ends on a cheerful(ish) note: strongmen do fall. And the more personal their authoritarianism, the more inevitable that end is. Their methods are counter-productive in the end because they do not govern well, people can eventually lose their fear of opposing publicly the regime and resistance has an impact, and they age: posing with no shirt doesn’t work so well as muscles sag.

Anyway, do read it. It’s so relevant. I’m not going to celebrate Trump’s defeat until he actually goes. There are a lot of wannabe authoritarians around elsewhere as well as the ones we have currently in countries such as Hungary or Turkey. This book has great insights about the dynamics of strongmanism, which I fear will not go away any time soon. 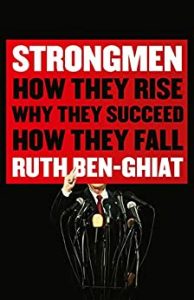