I read Stephen Macekura’s The Mismeasure of Progress: Economic Growth and its Critics in proof, and just enjoyed reading it again now it’s been published. People who know about my work won’t be surprised to hear that this is just my cup of tea. The question preoccupies me as much as it ever did – what counts as progress and how do we count it? – along, increasingly, with the issue of who gets to answer the question.

There are now quite a few books about the limitations of GDP, or history of GDP, or both (eg as well as my GDP: A Brief But Affectionate History, Matthias Schmelzer’s The Hegemony of Growth, Philip Lepenies The Power of a Single Number, Ehsan Masood’s The Great Invention, Brett Chrostophers’ Banking Across Boundaries, and more). So Macekura has this recent literature to build on as well as older classics including Alain Desrosieres and Theodore Porter. What he brings is a unified story about the critics of GDP and the System of National Accounts told from the 1940s on, and particularly including the perspective of the economists and statisticians working on or in developing economies.

That the arcana of economic statistics matter is clear from the start: “Accounting and accountability are closely intertwined,” Macekura writes. His framework is James Scott‘s powerful concept of state ‘legibility’. This makes the imperialist habit clear when it comes to the history of national accounting in the colonies of western powers. As one Colonial Office official put it, the UK had to ‘level up’ its colonies, and would do so by increasing their GDP growth. Hmmm. That term is oddly familiar.

The heroes of the tale in some ways are economists such as Phyllis Deane of NIESR and Dudles Seers, founder of the Institute for Development Studies, for their appreciation that economies are not all the same. The fabric of life in low income countries was profoundly different from the standard framework it was supposed to fit. However, western critics of the focus on economic growth – whether for this reason or because of the increasing concern with environmental limits – were in turn criticised by some economists and others from the countries concerned, who considered that to not prioritise growth was a western luxury. “The Limits To Growth report [1972] prompted a strong backlash from experts in the Global South,” Macekura notes. He goes on to argue that, “Growth critics often sought to replace one set of numbers in governance with another. They mounted a technocratic critique of technocracy that claimed the basic problems of contemporary life could be resolved through the use of socially relevant and more specialized data.”

The book ends with a picture of the critics of growth and of GDP (overlapping but certainly not identical sets) in recent times, flagging questions such as the measurement of the financial sector, as well as the ever-more pressing sustainability issues. He ends with a call for a wider set of metrics but also for enfranchising people to participate in the debate about progress. There is certainly quite widespread interest in matters of measurement, for all kinds of reasons, now. GDP is rapidly losing its legitimacy but the need for the social accounts that enable accountability is more important than ever. 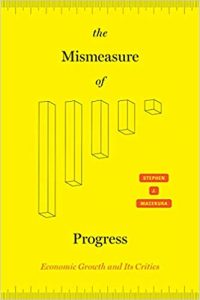