One of the things I like about Brett Christophers’ books is that they always make me think, and always provide an immensely well-informed critique of aspects of economics that economists don’t interrogate enough themselves. His new book, Rentier Capitalism: Who Owns the Economy and Who Pays for it?, is no exception. It’s an essential read for anyone thinking about what UK governments might need to do differently as the pandemic upends the economy, and people’s jobs, without doubt feeding an appetite for some significant change in the philosophy of public policy.

The new one is a natural follow-up to the author’s previous book, The New Enclosure: The Appropriation of Public Land in Neoliberal Britain, on the inequalities and inequities of land ownership in the UK. Landowners are one form of rentier. The new book argues that rentiership has, however, spread to many parts of the economy, and particularly so in the UK. At one level, the argument is a compelling attack on the way successive governments have taxed (or rather failed to tax), regulated (or failed to regulate), and generally favoured big companies and their ever-wealthier executives at the expense of the public good – in other words, the rest of us. We pay more for shoddier goods and services, either directly or as taxpayers, than we should.

It’s hard to argue with any of the targets skewered in the book: extractors of mineral wealth, the financial sector, the big outsourcers – whose incompetence is getting another outing in the test, track’n’trace fiasco – the gatekeeper digital platforms, the private equity firms running so much infrastructure, the exploiters of patents and ludicrously long copyright periods. Indeed, the book kindly quotes things I’ve written myself on some of these outrages.

Having said that, I have one small issue and one bigger issue with the analysis. The small issue is about the way he defines rentiership – as the earning of income from an asset whose ownership confers monopoly power. Assets can be intangible as well as tangible of course, but I’m not entirely convinced that everything presented as an asset in the book is one. To my mind, an asset is something with a stock, which can be depleted or augmented, providing a flow of services over time. Land, or oil, or physical infrastructure, for sure. Digital platform markets – probably. Outsourcing contracts – not so sure, it depends. Perhaps as a competition economist I see everything as a competition problem, but I think the common issue in all these examples is monopoly power and the artificial scarcity it creates, and we should be analysing monopoly rents, and their regulation.

The bigger issue is about the way the concept of an asset is becoming more or less demonised in some areas of social science, as an effective synonym for the use of money in inappropriate domains. Debate about the limits of markets is time-honoured and I have no problem with it. But if it is now inappropriate to regard anything as an asset, how on earth can we think about sustainability? To give a specific example, I can understand why some people think it is morally wrong to put a market price on clean air or biodiversity, even while making the economist’s counter-argument that refusing to do so imposes an implicit price of zero, which is even wronger. However, if we don’t think about nature as an asset, whose stocks we should steward, I find it hard to see how to embed concern for the future in policy choices. In my work thinking about how to get beyond the policy short-termism of a focus on GDP growth, measuring and understanding the whole range of assets available to people has been key.

There have been a number of books recently criticising ‘assetization’ so Brett is not alone. My questions to the various authors, all I think people inclined to the left of politics, is a serious one. How does ‘assetization’ differ from ‘monetization’? Are the arguments about it really distinct from those about monopoly power, as made for example by Thomas Phillipon? And above all how are we to think about, and name, those things in which we should be investing, or at least not depleting, to have regard for the future? 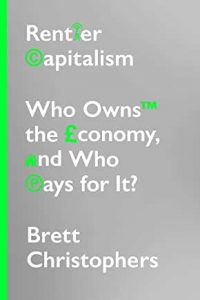 2 thoughts on “Talking about the future”