There have been lots of books of late about the Vienna Circle and 1920s philosophy, and I’ve been reading them all. It started with Exact Thinking in Demented Times by Karl Sigmund, which I bought for the title and stayed to enjoy. When lock-down started in March Cheryl Misak’s biography of Frank Ramsey: A Sheer Excess of Powers (Ramsey was the English translator of Wittgenstein) was a welcome diversion. Lately I finished Wolfram Eilenberger’s Time of the Magicians: The Invention of Modern Thought 1919-1929, which ranges over the lives and thought of Walter Benjamin, Ernst Cassirer, Martin Heidegger and – again – Ludwig Wittgenstein. Along the way I read Quinn Slobodian’s economics-inflected Globalists. And now I’ve started David Edmonds’ The Murder of Professor Schlick: The Rise and Fall of the Vienna Circle, a cracking read at least so far: Chapter 1 has set me up to read the rest of it over the weekend.

Whether I could give you pithy summaries of the philosophical world views of the protagonists is another matter entirely. Take Time of the Magicians. My undergraduate exposure to Wittgenstein in the late 1970s was an aversion therapy that will last a lifetime – it was impossible for me to understand a word. Heidegger is famously incomprehensible. Walter Benjamin is hardly known for his pellucid prose and after all influenced the Frankfurt School. All three of them, Eilenberger writes, rejected the conventions of academic philosophy and aimed for a “constellation of dramatic tensions that hover around the word ‘cult’.” And of course they succeeded, with three entirely different cults – linguistic philosophy, existentialism and cultural Marxism.

Cassirer is the least well-known of the bunch and yet seemed to me, reading this, the most sympathetic. Perhaps this reflects my being able to grasp what he was on about. Sadly, he represents old-fashioned thought as against the modernists. The Stanford Encyclopedia bills him as a bridge between the analytic and continental traditions in philosophy, between science and the humanities.

I confess to glazing over at paragraphs explaining Dasein, but the tale around the philosophy is compelling stuff – extraordinary characters and lives (except poor old bourgeois Cassirer, at least in the 1920s), intellectual rivalries, and ideas mattering. Perhaps that’s why the intellectual ferment of Vienna, Berlin, Cambridge etc in the 1920s is so compelling – especially knowing what came in the decades afterwards. Or perhaps all these authors are responding to a sense in the air that another hinge in history is upon us. Or perhaps it’s just the centenary effect. In any case, I’ve enjoyed all of these books, Dasein notwithstanding. 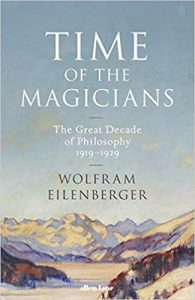 One thought on “Modern thinking and the 1920s”