Cheryl Misak’s biography Frank Ramsey: A Sheer Excess of Powers is terrific. It’s the first full biography of the lost genius of economics, philosophy and maths – he died at the age of just 26 having already made fundamental contributions in each field, each of which has its Ramsey rule or principle. There’s also the ‘Ramsey effect’ of having a brilliant idea only to discover that Frank Ramsey had it first. There is an earlier biography of him by Karl Sabbagh, Shooting Star, which is also well worth a read but it doesn’t have the scale or ambition of this new one.

Misak takes us to the intellectual environment of the 1920s, Moore and also Russell ascendant in Cambridge philosophy, Keynes in economics, logical positivism and the Vienna circle getting into gear. The personal story – growing up in Cambridge as one of four children of a not particularly inspired and narrowly religious mathematics don – is threaded alongside the intellectual journey. Ramsey was sent to Winchester, which sounds hellish, then did the maths Tripos at Trinity College – his entire life centred on Cambridge.

As a teenage undergraduate student he was identified as the right person to translate Wittgenstein’s Tractatus – the only person who might understand it. Wittgenstein – what an absolutely dreadful man. I for one have also always found both early and late Wittgenstein totally unintelligible, although accepting there does seem to be a consensus that he was a genius. Ramsey seems to have thought so, while disagreeing with key arguments in the Tractatus; they continued their conversation until Ramsey’s death, albeit with Wittgenstein having a big sulk of several years in the middle, refusing to correspond with him.

Anyway, on graduation Ramsey was snapped up by Kings as a Fellow (at 21), and embarked on foundational work in mathematics with massively influential sidelines in Philosophy and economics. (The biography has useful boxes written by distinguished scholars explaining Ramsey’s main contributions in each field.) Economists such as Keynes and Pigou used him to check their maths, and he also reviewed submissions to the Economic Journal for Keynes. Sraffa was a friend. There are intriguing signs in his last paper that Ramsey would have taken forward the pragmatism of C.S.Peirce (another pretty unintelligible writer – or maybe it’s me and philosophy…). Who knows what other contributions he would have made in economics.

But Ramsey was no narrow, dull academic. He socialised with the Bloomsbury set, advocated free love, went to Vienna to be psychoanalysed, joined societies, played tennis, and like everyone at the time wrote countless letters – Misak has clearly spent vast amounts of itme in the archives.

A sheer excess of powers. A shooting star. Both seem apt descriptions. In just a few years he had published a dozen or so transformational papers spanning three fields. It must be Ramsey’s tragic early death that explains why he isn’t more widely known. This biography is my book of the year so far. 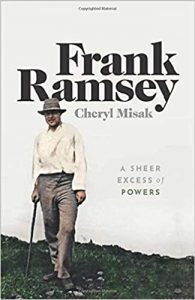