Continuing my 1920s run, I very much enjoyed The Murder of Professor Schlick: The Rise and Fall of the Vienna Circle by David Edmonds. Edmonds was also co-author (with John Eidinow) of the equally enjoyable Wittgenstein’s Poker, and has a real knack for explaining ideas within the intellectual climate of the times, and also for the sheer story-telling about the lives of those involved – including how their friendships and rivalries shaped their work.

For example, yes we do indeed need to know that Gustav Bergmann, although a minor figure in the history of philosophy, and not a nice person (‘rude, arrogant, insecure and argumentative’), used to lie on a table in the middle of the lecture hall, smoking a cigar, and blow smoke at whichever poor student was to speak next. This was post-war, having escaped Europe. The apparent trivia do illuminate character.

One of my favourites is Kurt Godel, although another strange character. Introverted and disturbed, he starved to death at home while his wife was in hospital. I often think about the incompleteness theorem though, and the way it has far wider scope than is perhaps realised.

In the end I slightly preferred The Murder of Professor Schlick to Time of the Magicians, but this might have been the reduced prominence in the former of both Wittgenstein and the appalling Heidegger. People commented after my earlier post that I need to give Wittgenstein a chance, and recommended some Wittgenstein-made-simple things to read (OK, I exaggerate – W-made-a-bit-clearer). Afraid I’ll pass on those. Enough of the 1920s/1930s for now – years when ideas were lethal. 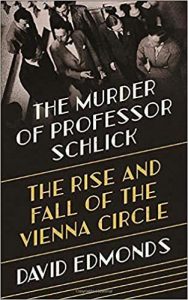