I’ve greatly enjoyed reading Arts and Minds, a history of the Royal Society of Arts (RSA) by Anton Howes. Established in 1754, the Royal Society for the Encouragement of Arts, Manufactures and Commerce, was one of the products of the Enlightenment, the “Baconian Project’ of accumulating and testing knowledge that might one day be useful. The book tells its story from the beginning in a London coffee house to its activities today (although I must admit to finding the earlier chapters more interesting than the recent history – perhaps because as a member for some years I’m more or less aware of it.)

The idea from the start was to encourage the development of practical innovations, rather than seek ‘pure’ scientific knowledge like the Royal Society – this division also reflected a social divide, with the humbler artisans uncomfortable in the more aristocratic circles of the latter. Awarding prizes for what you might term everyday innovations, including things with social but not necessarily market value. As Howes notes, the Society’s ‘premiums’ have sometimes been unfavourably contrasted with patents as being ineffective compared to intellectual property rights: “The Society of Arts was never supposed to compete with the patent system nor even to promote inventions. It was supposed to encourage things that would not otherwise have been done.”

Over the decades, the interests of the Society changed, with the arts sometimes to the fore, and at other times industrial design or agricultural improvement. There was a patriotic flavour to this: part of the aim was to ensure Britain stayed ahead of the French, whose superior design skills were recognised early on.”Britain of course had many eminent artists and scientists- some of the best in the world – but it needed to diffuse science and design more widely throughout its population. French manufacturers of all kinds seemed to have superior taste; many of their working classes were provided with scientific training.” The Society played a key role in the 1851 Great Exhibition, showcasing the inventive triumphs of the world but particularly of Britain, but also aiming to educated the British public to have more sophisticated tastes in the items being purchased. The outcrop of Prince Albert-inspired and encouraged museums in South Kensington were by-products. The Society has long played a significant role in technical education, as well as encouraging designers through prizes and competitions.

I ended up concluding that the RSA is a very British institution in some ways – formed with strong central values and aims yet highly adaptable to changing needs, cherishing both tradition and innovation, an essential piece of the establishment jigsaw and yet often under-appreciated by “the elite”. The book is clearly a labour of love, and is packed with interesting bits of information: today’s nugget, highlighted on Twitter by the author, is that the rotation of modern sculptures on the 4th ’empty’ plinth in Trafalgar Square is due to Prue Leith, better known now as a judge on the Great British Bake-Off but previously an effective campaigner via the RSA for healthier and better eating in Britain. I’m an RSA Felloe (=member) too, so am fond of the organisation, but anybody interested in the process of invention, diffusion and changing tastes will greatly enjoy reading this. 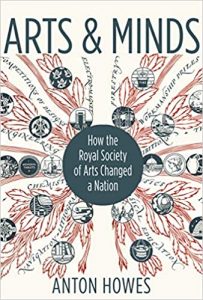