Sitting in quarantine in my office is the Piketty tome, Capital and Ideology, the book that’s so ridiculously massive it arrived with its own tote bag. I’d got far enough in to it to reach the long historical section, to which my first reaction was he didn’t need to show us all his workings in such immense detail.

Another economist who has turned to history is Jeff Sachs in his latest, The Ages of Globalisation: Geography, Technology and Institutions. Sachs has long been alert to the implications of geography for economic outcomes; in this book he adds a very long historical perspective. So long that we start in paleolithic times at 10,000 BCE. The narrative is framed in terms of seven ages: paleolithic, neolithic, equestrian (domestication of horses), classical (Rome/Han China, ocean (start of European empires), industrial and digital.

There has been a trend towards these long-perspective books in recent times: Ian Morris’s Why the West Rules (For Now), Jared Diamond’s Guns, Germs and Steel and Collapse, James Scott’s Against the Grain, the dreadful Sapiens by Yuval Noah Harari. If you have read a number of these, then much of the ground covered in Sachs’s book will seem familiar; there’s only so much that is known about paleolithic times. Its great merit – especially if you haven’t read any of the others – is that it’s concise, and sends the interested reader to other sources. It doesn’t need its own tote bag, and Sachs wears his own extensive reading lightly. He’s a very clear writer, too, and the book has some lovely (colour) charts and maps.

The pitfall of taking this synoptic approach is that a lot hangs on the narrative thread and underlying argument. Sachs’s seven ages work quite well in this regard, and do include sections on China, India, and the Islamic world. The argument in this book – a bit like Martin Sandbu’s new book, The Economics of Belonging, which I am reviewing for another publication – is that we shouldn’t be turning our back on globalisation. It can be made to work better for the many, not just the few, if we take the SDGs and international organisations seriously and reform the latter.

I’m sceptical that reforming the UN will fix anything. One of the earlier threads that gets lost in the final ‘what to do’ chapter is the way technologies shape what is feasible in terms of governance as well as shaping the form of economic globalisation that occurs. Still, it’s a good thing there are still some advocates for globalism rather than nationalism, and for the global public good. It’s a pre-pandemic book but post-publication events suggest this is the time to argue for at least some parts of the international order to be strengthened. 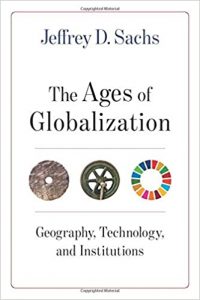