I’ve torn myself away from Twitter, horrified by the disintegration of the United States, the end point of its years of institutional racism and grotesque inequality, fuelled by Trump. George Packer’s brilliant article in The Atlantic a few weeks ago captured it: “We are Living in a Failed State.”

How did this come about? Well, The Light that Failed: A Reckoning by Ivan Krastev and Stephen Holmes seems like a pretty good diagnosis of how modern democratic liberalism has come to an end since 1989. The book starts with Eastern Europe, and moves on to Russia, China and finally the US. It uses the device of imitation: the post-Communist countries of eastern and central Europe wanted to be like the West in its idealised, peak-End of History image. They wanted to modernise, ‘normalise’, and become just like the countries of the EU. Yet the 1989 revolutions imitating liberalism have ended up in illiberal counter-revolutions, for there was a chasm between the ideal and the reality. “If we examine the gap between Western expectations and Eastern realities after Communism, we can discover an important source of the mental stress created in Central and Eastern Europe by a revolution aimed at importing ot imitating a foreign version of normailty.” I take this to allude to the importation of western economic and political institutions without consideration of local history and realities. Much has been written about the naive and ultimately counterproductive economic ‘shock therapies’ of the early 1990s.

Moving on to Russia, the authors argue that Putin’s imitation of the west has taken an aggressive, sarcastic turn – “ironic mimicry and reverse engineering of American hypocrisy.” His aim in interfering in elections and setting bots and trolls to run amok on social media is to dishearten and confuse, sow discord. “The West has started to resemble Putin’s Russia more than we are ready to acknowledge,” they write.

As for Trump, they argue that the irreversible damage he has caused to American democracy has involved deploying a populist gambit, corroding trust “not by lying but by telling truths selectively, especially half truths with which liberals are inclined to agree – globalization has only served the financial elite, US troops should not be entangled in Syria or Afghanistan, ‘the system’ is unfair. “The Trump movement fits into a global culture of grievance and victimhood,” the same culture exploited by Orban in Hungary, or indeed the authoritarian populists of western Europe such as Le Pen or Farage.

This an essential and sobering read. This is far from my expertise, but it seems to me to capture something essential about the political psychology about the past 30 years. The book ends by presenting today’s situation as a fork in the road: tragedy or hope. Is there hope for a chastened liberalism? It’s certainly worth working for it, and in a different frame of mind one can certainly see this book as a polemic that ignores countervailing forces. But today’s images and headlines, in the context of a global health emergency and economic catastrophe, make it hard to feel optimistic. 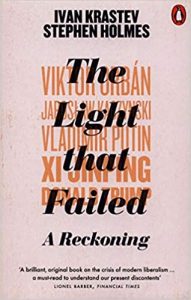