Angrynomics by Eric Lonergan and Mark Blyth is a rip-roaring read, and I wish I’d been in the pub with them as they discussed the state of the world and how to set it to rights. Not that I wholly agree with them, although disagreeing would obviously be half the fun. Normally I hate dialogue formats, as they’re usually constructed as a kind of semi-polite Punch and Judy show, presenting polarised views that are never intended to be reconciled. Lonergan and Blyth – it even sounds like a Victorian music hall act – agree on the basics so they riff of each other here in a more positive way.

Their basic thesis is that there are two kinds of anger abroad in the world: moral outrage (good) and tribal anger (bad), both reactions to the way the global economy has affected people since 1989.

Increased inequality is part of the story, genuine economic grievance in the rust belt and its equivalents, and another part is the cynical exploitation of tribalism or identitarianism by some politicians. So Lonergan and Blyth wear their left-of-centre hearts on their sleeves. The dialogues then describe and discuss the economic aspects of the political changes amply described in the now-extensive ‘decline of democracy’ literature – the micro, the macro/monetary, inequality (including, importantly, intergenerational), technological change – concluding with what to do now.

One huge gap evident right at the start is a passing parenthesis that the expression of anger is a largely male phenomenon. The book never picks this up; there is surely an important gender aspect to the way work has changed.

I disagree with dating the anger phenomenon to the collapse of communism in 1989, which removed a coherent (albeit flawed) ideology to oppose neoliberalism. Surely the hinge was the crisis of the 1970s, Thatcher and Reagan, and the early 1980s recession. That was the start of de-industrialisation, and the scarring of people’s economic prospects for the rest of their lives, and their children’s. These sea changes take time and there is never a single moment. As the book notes, too little has been reformed since 2008/9, but my view is that looking back with the hindsight of 2030, the combination of the Financial Crisis and the Covid depression will prove to be another hinge. (The book pre-dates the pandemic.)

As for the proposals, I think they get the role of competition all wrong, blaming excessive competition in tech and telecoms – whaaaaat??? – for the race to the bottom in employment practices. Amazon reports low profits because it reinvests so much revenue in continuing world domination, not because it has scrappy margins due to competitors snapping at its heels. I understand little about current monetary and alternative proposals, but as a diehard microeconomist find it hard to understand how administered negative prices in a market dominated by the state (ie central bank) can function well. Regulate the financial sector firmly – a big yes. The book has an interesting idea about government auctions of collective data rights – like spectrum auctions – which answers my profound objection to the proposal ‘create property rights in personal data and sell them’, namely that the value in data is collective, is due to aggregation.

Anyway, my copy has a combination of big ticks and scrawls of ‘nonsense!’ in the margins. A very satisfying read. 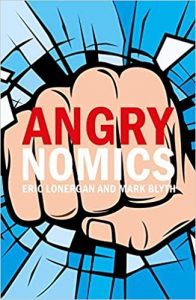