As someone interested in public policy, from the doing perspective as well as for research and teaching, thinking about social welfare is at the heart of matters for me. What does it mean to think about a government intervention or other collective action ‘making things better’ – for whom, and by how much? I think economists have been pretty poor at addressing these questions, despite past waves of interest in welfare economics – the last of them quite some time ago.

So I pounced on Matthew Adler’s Measuring Social Welfare: An Introduction when my colleague Anna Alexandrova pointed it out to me. The book does a thorough job of setting out, in not too technical a manner, how to apply a social welfare approach to public choices. Adler advocates a ‘welfare-consequentialist’ approach: decisions need to be evaluated according to their outcomes, which depend on the pattern of individual well-being outcomes. He also argues that interpersonal comparisons – and hence rules for ranking these – are essential. The inability to take account of distributional issues, and different marginal utilities of income and consumption at different income levels, makes cost-benefit analysis – ranking policies by summing the monetary equivalents of individuals’ wellbeing –  inadequate. I agree: CBA pretends policy decisions can be non-normative, which is clearly incorrect (and what’s more this pretence has had significant distributional and hence ethical consequences).

Although it spares the reader the algebra of social choice theory, the book is quite theoretical but does include some examples in later chapters, looking at regulations aiming to limit risks (such as health and safety rules or pollution rules). I’m still thinking through what Adlers’ social welfare approach might mean in practice, though. Its approach is a long way from being translatable into a set of policy rules like the Treasury’s Green Book. Nevertheless, this is an important read if economists are going to renew welfare economics. 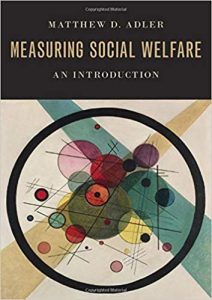