The question of how to govern and regulate new technologies has long interested me, including in the context of a Bennett Institute and Open Data Institute report on the (social welfare) value of data, which we’ll be publishing in a few days’ time. One of the pressing issues in order to crystallise the positive spillovers from data (and so much of the attention in public debate only focuses on the negative spillovers) is the development of trustworthy institutions to handle access rights. We’re going to be doing more work on the governance of technologies, taking a historical perspective – more on that another time.

Anyway, this interest made me delighted to learn – chatting to him at the annual TSE digital conference – that Stephen Maurer had recently published Self-governance in Science: Community-Based Strategies for Managing Dangerous Knowledge. It’s terrifically interesting & I recommend it to anyone interested in this area.

The book looks at two areas, commerce and academic research, in two ways: historical case study examples; and economic theory. There are examples of success and of failure in both commercial and academic worlds, and the economic models summarise the characteristics that explain whether or not self-governance can be sustained.

So for instance in the commercial world, food safety and sustainable fisheries standards have been adopted and largely maintained largely through private governance initiatives and mechanisms, synthetic biology much less so, having an alphabet soup of competing standards. Competitive markets are not well able to sustain private standards, Maurer suggests: “Competitive markets can only address problems where society has previously addressed some price tag to the issue.” Externalities do not carry these price tags. Hence supply chains with anchor firms are better able to bear the costs of compliance with standards – the big purchasing firm can require its suppliers to adhere.

Similarly, in the case of academic science the issue is whether there are viable mechanisms to force dissenting minorities to adhere to standards such as moratoria on certain kinds of research. The case studies suggest it is actually harder to bring about self-governance in scientific research as there are weaker sanctions than the financial ones at play in the commercial world. Success hinges on the community having a high level of mutual trust, and sometimes on the threat of formal government regulation. The book offers some useful strategies for scientific self-governance such as building coalitions of the willing over time (small p politics), and co-opting the editors of significant journals – as the race to publish first is so often the reason for the failure of research moratoria to last.

The one element I thought was largely missing from the analytical sections was the extent to which the character of the technologies or goods themselves affect the likelihood of successful self-governance. This is one aspect that has come up in our preparatory work – the cost and accessibility of different production technologies. The analysis here focuses on the costs of implementing standards, and on monitoring and enforcement.

This is a fascinating book, including the case studies, which range from atomic physics to fair trade coffee. It isn’t intended to be a practical guide (& the title is hardly the airport bookstore variety) but anybody interested in raising standards in supply chains or finding ways to manage the deployment of new technologies will find a lot of useful insights here. 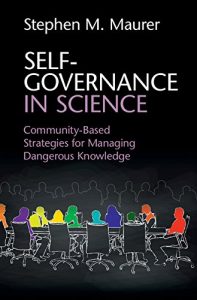