There’s a new wave of interest in the degrowth idea, recently summed up in the New Yorker by John Cassidy. The degrowthers are mainly inspired by environmental concerns – how can consumption possibly continue to increase without limit without destroying the planet? – and the article also refers to Vaclav Smil’s recent book Growth, which adds to this seeming common sense the intellectual heft of energy physics and logistic curves.

I have no ideological commitment to the view that measured GDP growth will always revert to 1.5-2%, and found much food for thought in Smil. However, there is a misunderstanding in the degrowth movement about what growth implies for physical material and energy use, well explained by Noah Smith in his recent Bloomberg column. My colleague Dimitri Zenghelis also does an excellent job here of debunking degrowth, arguing it is not the best or only way to be green.

Smith refers to another recent book, Fully Grown: Why a Stagnant Economy is a Sign of Success by Dietrich Vollrath, to make the point that we can probably expect slower growth (Smil’s S-curve is flattening out) but this is very different from degrowth or zero growth.

The basic point is that the degrowth argument doesn’t either acknowledge intangible output growth or explain what somehow needs to be taken away from the economy when there is a new innovationto keep growth below zero. On the first point, think about oral rehydration therapy or mini-aspirin – new uses of existing materials which produce improved health outcomes that people are willing to pay for, whose value far exceeds the materials costs (sugar, salt and water; salicylic acid). On the second, if somebody invents a new item everybody wants to purchase – the way smartphones arrived in 2007, say – then what would we stop them buying to keep total growth at zero? And how?

Prof Vollrath’s book, which I read at the proof stage, is tremendous. He portrays the recent slowdown as an inevitability, the result of economic success. Past gains in health, and lower fertility rates due to reduced infant mortality and higher incomes, explain population ageing in the rich economies. Demography is reducing potential growth. We are on the whole also taking more leisure, with a trend decline in hours worked. Purchases of services are taking over from material goods as a share of expenditure, and productivity growth is slower in the service sector (for familiar, Baumol reasons). These two trends go a long way to explaining reduced growth.

The second half of the book explores other potential reasons for the growth slowdown, such as increased market power (see Thomas Phillippon), inequality (Piketty) or too much government tax and regulation – and sets out the data explaining why none has a big enough effect to explain a lot of the trend slowdown. “I see no obvious reason why the growth rate would accelerate in the near future,” Vollrath concludes.

I really enjoyed Fully Grown, which gave me much food for thought. It also is simply excellent on the data sources, growth accounting, and trends. But I don’t think it tells the whole story about innovation either. Vollrath accepts (as Robert Gordon does not) that there are significant technological advances under way; but he sees these as making production more efficient and thus accelerating the shift to services: an ever-smaller part of the economy is becoming super-efficient.

The catch, I think, is in using real GDP per capita as the sole indicator of growth. It is a conceptually flawed measure for an intangible/services economy. Consider a haircut, a service for which there is at least a volume measure (which many services do not have). If the price of haircuts goes up, real GDP as constructed goes down; but if the price is rising because people are substituting from cheap cuts at Big Jim’s Trims round the corner to expensive cuts in Covent Garden, it actually means that they are purchasing a haircut plus a bundle of quality attributes – lovely salon, free cup of tea, head massage, an hour’s talking therapy from a charming hairdresser….. In some four-fifths of the economy, the Price x Quantity = Revenue equation used to construct the growth statistics does not work. Either we should be quality-adjusting many more purchases (and this has its own problems) or there isn’t even a volume measure (what is a unit of management consultancy??)

Anyway, read Vollrath and Smil, devote energy to cherishing the environment. Read our Benett Institute report out in 10 days on how to take a more rounded view of economic progress, including environmental impact, by considering wealth. But ignore the fashionable lure of degrowth. 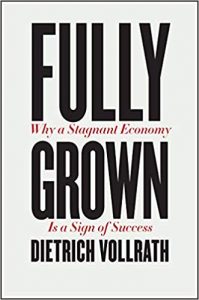 One thought on “Growth, stagnation, and degrowth”