Thomas Philippon’s The Great Reversal: How America Gave Up On Free Markets, my pre-Xmas Day reading, deserves the positive reviews it’s been getting. It’s a highly accessible synthesis of Prof Philippon’s always-illuminating research into the empirics of US finance and competition. The argument is neatly summed up in the final part of the book: the US economy has become meaningfully less competitive, leading to higher prices, lower wages and lower productivity, and the main explanation is regulatory capture – the extraordinary (in scale and effectiveness) corporate lobbying in the US. The method of argument is set up near the beginning: all the possible explanations for the rise in concentration are listed:

The first part of the book explores these different hypotheses in the US data. The two left standing are decreased domestic competition with some – incomplete – mitigation from overseas competition. For my taste the book takes the available data on intangible assets far too seriously – they are highly incomplete and have limitations – but on the other hand part of the value of intangible assets is politically created (eg over-long copyright, scope for patent trolling). There is a ton of interesting evidence along the way – my favourite table is 13.2, the star companies over the decades; it shows that today’s tech stars are actually smaller in most ways (market cap, profitability and especially employment share) than star companies even of the 50s, 60s and 70s. There’s a very interesting section on how unintegrated they are with the rest of the US economy compared with the past.

Part 2 of the book is a compare and contrast between the US and EU, observing that the EU’s Single Market and enforcement by independent EU-level bodies means European markets are now notably more competitive than their US counterparts (not that Philippon sounds particularly impressed with other aspects of the EU economy). There is a neat political economy explanation for the independence of regulators: no individual country wants another country to dominate so independence is a Nash equilibrium.

The third part of the book covers campaign finance and lobbying in the US – no surprises – while the fourth part looks more closely at some individual sectors. The eye-opener is finance: despite extraordinary technological advances and innovation (after all, finance is one of the most ICT-intensive industries), the sector is no more efficient now than at the time of  the original JP Morgan. “Why is the non-financial sector transferring so much income to the financial sector?” Philippon asks. Lack of entry, and heavy-handed regulation (often a barrier to entry) are the culprits. I do constantly find it extraordinary that finance, having almost brought down the global economy and cost gazillions in lost output, is back to exactly where it was in the mid-2000s. We could go round the goldfish bowl again. This more than anything signals the political power of the finance lobby: the sector paid a negligible price for its actions.

So all in all, The Great Reversal is an important read. I also welcome one of the concluding points: Philippon writes, “I was surprised by the gap between economic research and policy,” in researching the book. I couldn’t agree more. Too few academics have any incentive to produce timely and policy-relevant research, as opposed to their strong incentive to produce narrow papers that will (slowly) get published in a small number of journals. Thank goodness for engaged academics like Prof Philippon. 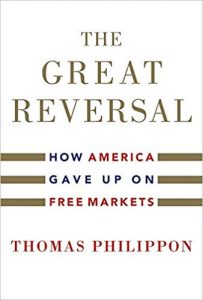