After a fantastic recent workshop I read Merchants of Doubt by Naomi Oreskes and Erik Conway. I’m late to this (it was first published in 2010) & had read some reviews, but this didn’t make the book any less shocking. The subtitle is ‘How a handful of scientists obscured the truth on issues from tobacco smoke to global warming.’ Part of the scandal is that it was literally a handful of people who abused their scientific credentials in one area to persuade the media and public that there was meaningful scientific doubt about the lethalness of smoking or the reality of global warming. These were mainly men who had worked as cold warrior scientists, mostly physicists, but nevertheless commenting in an authoritative tone on biomedical or environmental science.

The book’s hypothesis is that the doubt-merchants – consulting for big companies or paid through free-market foundations the corporations had established and funded – were scientists turned anti-science because they were opposed to regulation. Regulation was what communists did; capitalist corporations should be free to do what they want. The tactics used in each of the examples where there was a solid academic consensus about the issue – the hole in the ozone layer, tobacco, anthropogenic global warming, acid rain, etc – was a trifecta: point out that there is always some scientific doubt about something (indeed – science progresses by skeptical enquiry and there are always more avenues to explore); argue that the costs of remedying the issue are disproportionately high; attack the scientists as ideological and mainly interested in progressing their own careers (those elitist ‘experts’). Scientists were portrayed as at best the enforcers of the nanny state, wanting to prevent people enjoying their natural liberties.

I can sort of understand the psychology of conservative Cold Warriors who, over time, burrow ever further into their own reality bunker – recall, it is literally the same small group of people in the US over time, joined in the 1980s by some UK free marketeers. I am less able to understand the media, however. The book describes the corporate lobbyists’ use of the ‘fairness doctrine’ in US TV broadcasting, requiring balanced coverage of controversial matters. The issues described here were not controversial – the controversy was manufactured. It was not hard in these cases to discern where the opinion of the great majority of scientists lay. This is literally a core part of the job of journalists and their editors – figuring out how to tease something close to fact out of a conflicting set of statements by people with their own agendas and interests.

Yet the false balance is widespread in journalism still. In 2011 on the BBC Trust we commissioned a report from Professor Steve Jones on the BBC’s science coverage and he highlighted the danger of this false balance interpretation of its editorial requirement of ‘due impartiality’. He wrote: “Attempts to give a place to anyone, however unqualified, who claims interest can make for false balance,” and the opposite of impartiality. It’s a few years old but I commend it still, along with the sobering Merchants of Doubt. After all, in some of the cases described in the book, people died when sufficient doubt was sewn in the public mind to inhibit regulatory action; and when it comes to global warming the stakes are huge. 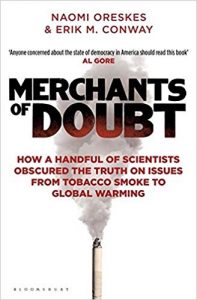