Matt Stoller’s Goliath: The 100 year war between monopoly and democracy ended up being a different book from the one I’d expected: I thought it was going to be about (lack of) competition in digital markets but in fact it’s a broader economic/political economy history of 20th century America in terms of the ebb and flow of the power of big business. Anti-trust policy is just one part of the story.

It’s an interesting story, one of the steady accumulation of economic and political power in a few hands, interrupted periodically by a decisive political, often populist, reset in favour of the small farmer or business (occasionally even the consumer). It’s also a story told from an anti-big business perspective, based on an analysis of the corruption of political power by accumulated money; which is fine, but it does make it a binary tale of heroes and villains. This includes one hero I hadn’t heard of before, Representative Wright Patman, a long-serving congressman on the side of the little people over the decades.

And some surprising villains. Chief among them is J.K. Galbraith, for his love of technocracy and big enterprises – after all it’s easier to direct an economy of big firms than little ones, and he was responsible for implementing price controls during the war. Galbraith wrote: There must be some element of monopoly in an industry if it is to be progressive.” He saw small firms and farmers as inherently conservative. Other public intellectuals such as Richard Hofstadter shared the perspective of small business being reactionary and inefficient, so the liberals become the corporatists – in contrast to the 1920s and 30s when those on the left (to be anachronistic about it) were standing up for the small guy. Thus, “Politics was no longer an avenue for structuring society but rather a means of ratifying what technologically driven organizations already saw as an optimal arrangement,” Stoller writes of the revival of corporatism in the 60s and 70s.

There are unsurprising villains too, of course, from Carnegie, Morgan and Mellon to Citibank’s Walter Wriston reviving the power of the financial sector by successfully unravelling the financial regulation that had been constraining the big banks since the Depression. Indeed, my big takeaway from the book was the need to constrain big finance, far more than big tech or big anything else.

One of the interesting things about the long-run perspective is the way it makes clear the pendulum in policy, from populist anti-big business to pro-big business phases in either oligarchic or corporatist modes. As a history of the US economy through this lens, Goliath is very stimulating. It is very US-centric, however – and this focus carries over into today’s debate about anti-trust or indeed other areas of economic policy. America matters, particularly in digital markets for obvious reasons, but it is also highly distinctive.

Trying to think through the extent to which the small guy/big business pendulum carries over to the UK or elsewhere in Europe, I concluded that it does to a degree. We had conglomeration in the 60s and 70s too. But in recent times European anti-trust practice has differed greatly from the US – I’m open to correction as this is a question of institutional history but I don’t think European competition authorities ever went the full Chicago School. (Just as inequality has increased everywhere but only the US is truly back to the Gilded Age.)

All this is by way of saying Goliath is well worth a read, bearing in mind its firmly – proudly – slanted perspective. It has all kinds of detail I didn’t know. I found its contrarian view about Galbraith, aligning him with Peter Drucker for example, absolutely fascinating & am still mulling over the relationship between technocracy and scale. 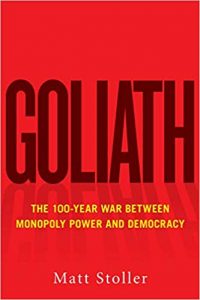