The weeks are flying past. I’ve read recently an array of non-economics books (Owen Hatherley’s Trans-Europe Express, Susan Orlean’s The Library Book, Francis Spufford’s True Stories, a couple of the re-issued Maigrets) and also Matt Stoller’s Goliath and Andrew McAfee’s More from Less. I’ll review Goliath in my next post.

More from Less: the surprising story of how we learned to prosper using fewer resources – and what happens next (to give it the full overly wordy subtitle) is presumably aimed at the airport bookshop market. It’s written in a very accessible way and it summarises a lot of interesting research – although not McAfee’s own.

The main point is that the material resource intensity of economic growth has been declining in the rich western economies. This is set in an account of the origins of modern capitalism in the Industrial Revolution – emphasising the importance of ideas and contestability through markets – and the urgent debate about the trade-off between humans gettern better of (escaping the Malthusian trap) and the damaging environmental impact of growth. The dematerialisation of the economy is helping improve the terms of that trade-off.

A major difficulty I have in reviewing this is that, although it’s an enjoyable read, I wrote a book making the same point in 1997, The Weightless World (out of print, free pdf here). There’s no reason at all McAfee should have read it as I was a nobody, and it was a long time ago. But it does mean that (perhaps uniquely) I can’t find anything that’s new in More From Less. The research he cites concerning dematerialisation dates from 2012 (Chris Goodall) and 2015 (Jesse Ausubel, The Return of Nature) – so this is another example of a phenomenon being discovered twice; because there was similar work in the mid-1990s on material flow accounts, on which I based my book. Alan Greenspan even made a speech about it in 1996. It’s a noteworthy phenomenon so I hope McAfee does alert new readers to it. He puts far more emphasis on environmental challenges than I did back in the more innocent 1990s; my focus was more on the socio-economic consequences of a dematerializing economy.

However, the weightlessness or dematerialization phenomenon doesn’t deliver a knockout blow to the degrowth argument that it is not enough to have a reduced but still positive material intensity to growth. Tim Jackson is the most thoughtful advocate of this argument – see this recent essay in Science. It may be that we need to find a way to read more lightly on the planet in absolute terms as well as relative ones, although I’ll welcome weightless growth as better than the weighty alternative. And – as even no growth is politically divisive, never mind degrowth – the issues raised in More From Less are difficult and important ones. 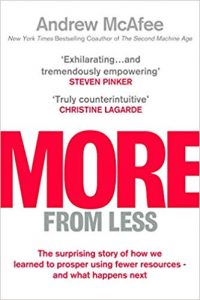