“A recurring theme of this book is that it is unreasonable to expect markets to always deliver outcomes that are just, acceptable, or even efficient.” So write Abhijit Banerjee and Esther Duflo at the start of one chapter of their new book – fabulously timed to coincide with the Nobel they just shared with Michael Kremer – Good Economics for Hard Times: Better Answers to Our Biggest Problems. I really enjoyed reading the book but it left me with one nagging question, of which more later. 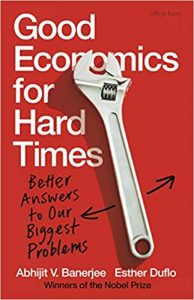 The Introduction is titled, ‘MEGA: Make Economics Great Again’, and sets out the framing of the rest of the book, which is to apply the methods of economic analysis to a range of big problems. Thus there are chapters on immigration and trade, technology, climate change, preferences and social choice, the welfre state. The model for each chapter is a beautifully clearly-written and quite balanced summary of the frontier of economic research and therefore of the conclusions economic expertise can justify when it comes to these major challenges. This makes it, by the way, an excellent teaching resource. There is relatively little about either the RCT methodology or behavioural economics for which the duo are famous, although these of course feature. A lot of the whole economic toolkit is covered.

For example, the chapter on immigration and its impact on the host country and its workers is a model of clarity in setting out why migrants may be complements rather than substitutes for native born workers, and what choices profit-maximizing employers might make. It gives the example of the 1964 expulsion of Mexican workers from California, on the grounds that they depressed local wages. “Their exit did nothing for the natives: wages and employment did not go up.” The reason was that farmers mechanized instead. For instance, adoption of tomato harvesting machines rose from zero in 1964 to 100% in 1967. The farmers also switched to crops for which harvesting machines were available, and for some time stopped growing others such as lettuce and strawberries.

The chapter on the likely impact of technology on jobs is similarly clear and yet also notes that there is scant consensus among economists on this. I thought this was the weakest chapter, but perhaps that’s because it’s my area and they try to cover a vast literature – taking in competition policy and inequality due to technology and positional goods and the nature of economic growth….. One could expend thousands of words on these. 🙂

The book is a bestseller and derservedly so. My big reservation about it is the way this demonstration of the analytical power of economic expertise lands in these ‘we’ve had enough of experts’ times. This is as much a matter of tone as content, but I found statements like this actually a bit uncomfortable: “This underscores the urgent need to set ideology aside and advocate for things most economists agree on, based on the recent research.” I have come to believe this deep urge among economists to separate the positive and normative – dating back to Lionel Robbins – is a mistake. Dani Rodrik’s Economics Rules, another excellent overview of ‘good economics’ is much more nuanced and less economics-imperialistic in this respect.

Economic analysis rocks, as does evidence, but we have to engage with the ideology too. Good economics is about more than technical expertise.