It’s the Christmas holiday; I’ve been doing some random reading. I’m part way through the new John Le Carre novel, Agent Running in the Field, which is ok though far from his best. Also half way through Matthew Adler’s Measuring Social Welfare. Meanwhile, I polished off Pandaemonium, a book I’ve had lying around since 2012, when it inspired Danny Boyle’s marvellous Olympic opening ceremony.

The book’s subtitle is ‘The Coming of the Machine Age as Seen by Contemporary Observers’. It’s a collection of extracts from writings between 1660 and 1886 gathered by Humphrey Jennings, one of the founders of Mass Observation. He is obviously in sympathy with the Ruskinite anti-machine age tendency but the extracts speak for themselves & I found it fascinating. To take one snippet, in an 1847 Autobiography of a Working Man, Alexander Somerville writes, “There is a time coming when realities shall go beyond any dreams … Nation exchanging with nation their products freely; thoughts exchanging themselves for thoughts, and never taking note of the geogrphical space they have to pass over, except to give the battery a little more of the elecric spirit; … man holding free fellowship with man, without taking note of the social distance which used to separate them…”

And I was moved by one breathless extract about a family journey to calculate the equivalent in today’s prices of 1839 fares from Liverpool to London on the railway: £2 11s and 3d for the master and £1 8s and 0d for the servant: about £350 and £150 respectively. The most expensive prices today for 1st and standard class would be £242 and £162.50, cheaper (£126 and £88.60) off-peak. And then it took the whole day at a maximum speed of 36mph, compared to 2.5 hours now. There is such a thing as progress…. though the 9d glass of wine taken as refreshment at Birmingham was probably a bit more of a bargain than today’s equivalent.

Santa as ever brought me lots of books and I have the trip to ASSA 2020 in San Diego next week followed by the Digital Economics conference in Toulouse coming up, so plenty of reading time. 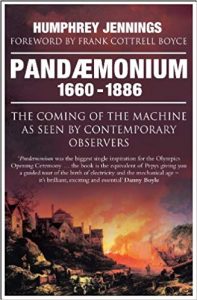