It’s very interesting the way interest in narratives is popping up in so many places. The Royal Society has been looking at narratives in AI and in science more generally. Now Robert Shiller of Irrational Exuberance (and Nobel Prize) fame has a new book called Narrative Economics: How Stories Go Viral and Drive Major Economic Events. The book builds on a lecture he gave a couple of years ago. It begins: “This book offers the beginnings of a new theory of economic change that introduces an important new element to the usual list of economic factors: contagious popular stories that spread through word of mouth, the news media and social media.”

As the preface notes, the idea isn’t new; the 1894 Palgrave’s Dictionary of Political Economy mentions narrative economics. Robert Merton’s well-known concept of self-fulfilling (or self-averting) prophecies covers much of the territory of narrative dynamics. But perhaps today’s economy is more vulnerable than ever to contagion. An early chart in the book illustrates the surge in the proportion of articles across several socal science and humanities disciplines that contain the word ‘narrative’. Economics and finance are well behind history (of course) but also anthropology, sociology and political science.

Anyway, the book is about how narrative contagion affects economic events. It has in mind epidemic models, as well as – well, narratives. Each chapter focuses on a number of examples. The first section starts with Bitcoin as an example of how narrative affected behaviour and outcomes, then introduces some of the concepts concerning how narratives ‘go viral’ and the psychology of contagion. Part 2 is a brief section setting out ‘seven propositions of narrative economics’ (including ‘truth is not enough to stop false narratives’. Quite.) Part 3 describes recurring economic narratives such as financial boom and bust, or automation and jobs. The final part of the book sets out questions for research.

The book is always interesting, but somewhat bitty, one example after another, lacking a grand theory of narrative framework. However, as Shiller points out in the final section, there is plenty of scope for quantitative approaches to understanding the economic role of narratives, particularly using recent text analysis tools. A cynic might paint this emphasis on narrative – also recently explored by George Akerlof and Dennis Snower – as classic economic imperialism. After all, she might say, sociology and anthropology have been onto this for years. Some economists might on the other hand dismiss the emphasis on narratives as a source of dynamics as woolly nonsense, merely anecdotal. But both responses would be too negative.

A move to extend the use of qualitative approaches in economics should be welcomed, and an extension of the also-welcome revival of economic history. Narrative Economics joins a couple of other recent books, such as Morson and Schapiro’s Cents and Sensibility and Uncertain Futures edited by Jens Beckert and Richard Bronk in restoring the humanity to economics. 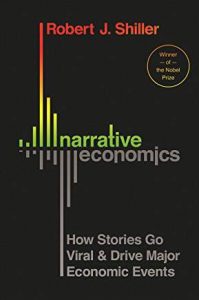 2 thoughts on “Once upon a time”