I spotted Range on the FT’s Business Book of the year longlist, and thought the subtitle appealing: How Generalists Triumph in a Specialized World. I’m definitely a fox not a hedgehog in Isaiah Berlin’s famous distinction (though I always wondered about the characterisation of each animal – are all hedgehogs like that? It’s a bit like the sheep and goats distinction – which is better? It isn’t obvious to me.) Anyway, there is definitely a lot of mileage in joining up knowledge silos. As Berlin described the difference:

“… [T]here exists a great chasm between those, on one side, who relate everything to a single central vision, one system, less or more coherent or articulate, in terms of which they understand, think and feel – a single, universal, organising principle in terms of which alone all that they are and say has significance – and, on the other side, those who pursue many ends, often unrelated and even contradictory, connected, if at all, only in some de facto way, for some psychological or physiological cause, related to no moral or aesthetic principle.”

Anyway, Range is an enjoyable read, although once you get the general drift it becomes rather repetitive, falling into the trap of being a terrific long magazine read stretched to nearly 300 pages. Still, it gave me a couple of marvellous new phrases: Undiscovered Public Knowledge (the kind machine learning systems are finding by interrogating massive databases); and Lateral Thinking With Withered Technology (innovation by reorganising existing technologies into new uses – this is a phrase from Gunpei Yokoi, the engineer who reinvented Nintendo).

The book claims many great thinkers as generalists. For example: “Charles Darwin’s greatest works represent interpretative compilations of facts first gathered by others.” However, the same example shows the limits of the claim about generalists’ superiority: Darwin had gathered plenty of facts for himself. If he hadn’t observed finches in the Galapagos for himself would he really have gone on to write On the Origin of Species? 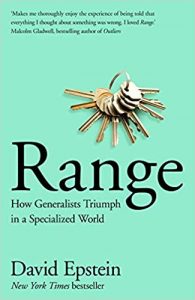