Richard Davies obviously made the kind of road trip many of us only dream of to write Extreme Economies: from Akita in Japan to Santiago in Chile, from Glasgow to Kinshasa. The locations he chose illustrate one of three characteristics – survival (refugee camps in Jordan, post-tsunami Aceh, a US prison in Louisiana), failure (Panama’s Darien Gap, Kinshasa in DRC, and post-industrial Glasgow), and the future (ageing Japan, digital Estonia, unequal Chile. As the book sums it up: “The year 2030, for most people on earth, will be a cocktail of these three cities: an urban society that is old, technologically advanced, and economically unequal.”

The book is a great read – I tore through it. An economist who can write so well while at the same time explaining the economic principles so clearly is always a joy. I will admit to being rather envious of the opportunity he had to visit all these places. Getting out and visiting should be required for all economists, whether they are writing about development and progress as Davies is, or about industrial organisation or education. You always learn something not only relevant but also important. One of the things I did love about this book was the painless administering of some substantial chunks of economic research – it’s an ideal read for eager 6th form students or undergraduates. It might encourage them to appreciate that economics is not only important but also exciting.

The book also includes some important threads. One is the environment as an economic as well as intrinsically valuable asset. Darien’s economy depends on extraction from the jungle, living now on its future potential: “The puzzle is why, in a region where everyone knows the environment is being degraded, the people of Darien can’t manage the economy in a way that stops it happening.” This segues into a discussion of the ‘tragedy of the commons’. Later, though, it’s Glasgow’s social capital, another overlooked asset, that’s pinpointed as one source of failure: “When an economic force is shared, unseen and hard to measure, you will do too little to protect it.” I couldn’t agree more. Social capital features in all the examples here, either as a source of resilience or a cause of failure. It isn’t a sufficient explanation of economic outcomes – for example, in the chapter on refugee camps in Jordan, one thrives and the other fails because of external forces shaping the structure of the camps and their economic potential – but it is a necessary element.

Davies picks this up in the conclusion: “The biggest gap in economics is the way it completely ignores social capital.” This is why our Bennett Institute Wealth Economy team is exploring the measurement of social capital. Economics doesn’t entirely ignore it – it gets lables such as ‘institutions’ or ‘goodwill’ – but is treated as a black box at best. So I agree with the book that economics will have more to offer the world if we measure and understand better the “subtler and more human aspects of income and wealth.”

Meanwhile, I recommend enjoying the tour through the rebuilt Aceh, refugee camps in Jordan, the market in Kinshasa, Lousiana’s Angola prison and all the other economies featured here. And I hope some TV producer will pick up the book and take its author round the world all over again to film it. 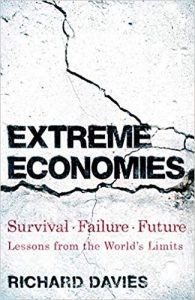 2 thoughts on “Going to extremes”