I’ve been on my travels so have a stack of things to post about, but it will have to wait until I’ve waded through the backlog of emails. Meanwhile, though, I polished off Deirdre McCloskey’s Economical Writing: Thirty-five rules for clear and persuasive prose. You don’t have to be an economist to benefit from the book, but it will certainly help many economists – we are not famed for clarity and elegance of expression. I’m a big fan of McCloskey’s writing, although she is something of an acquired taste. But, importantly, she is always a model of clarity.

The book has, as it indicates, a series of short chapters/rules, all good advice. (It’s an update and expanded version of earlier books, with additions on presentations and charts, though advice about the latter is mainly ‘read Edward Tufte’s books’.) It refers to other works and classic advice from authors such as Orwell and Twain. I loved the latter’s: “Eschew surplusage.”

The section that had me cheering was Number 4, being clear. I have long believed that there is nothing in economics that can’t be explained clearly in words; it isn’t string theory after all. “Bad writing makes slow reading,” McCloskey writes. Your reader has to stop and puzzle over what on earth you mean. She quotes Quintilian: “One ought to take care to write not merely so that the reader can understand, but so that he canot possibly misunderstand.” This is harder than it sounds. As the author of several books, I’ve learned that many readers take out of a book whatever thoughts they took into it. Still, what else is worth aiming for if you want to communicate your ideas?

Highly recommended for all who write as part of their work or for pleasure. Pretty much everybody? 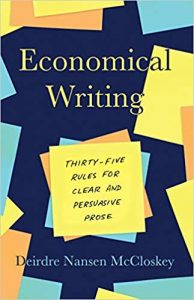 3 thoughts on “How to write”