I got very distracted by the list of econ & philosophy books I put together with the help of #econtwitter, so haven’t read much new stuff lately. The exception has been Shadows of Doubt: Stereotypes, Crime & the Pursuit of Justice by Brendan O’Flaherty & Rajiv Sethi, a fantastic and sobering book. The theme is the central role sterotyping plays in the criminal justice system. The dominant emotion in the context of crime and punishment is fear. People are making speedy and often high-profile decisions under conditions of great uncertainty, and often, great fear. In the courts there is inconclusive evidence and conflcting accounts. Stereotypes are in effect rules of thumb that enable people to come to judgments about how to act in the face of a possible crime, how to assume other people will behave, about what might have happened.

Most of the examples in the book are American, where dying while black in an encounter with law enforcement seems to happen all too often. Some are high-profile examples like the arrest of Harvard Professor Henry Louis Gates for trying to get into his own house. One of the arresting officers mused that the events might have gone differently if he, rather than his white colleague, had got to the scene first. It was ever thus, the book records – citing a 1944 Gunnar Myrdal 1book, for instance, which pointed out that most of the whites who killed blacks in the 1930s were police officers. Video recordings are making more the old, constant reality more apparent. As for the prison system, the incarceration for the US is the highest in the world per capita (more than five times higher than China’s and falling  disproportionately heavily on blacks and hispanics. “Such rates are unprecedented in world history,” the book observes.) However, for all that there are fewer guns and deaths involved elsewhere, and lower rates of imprisonment, there is obviously a racial aspect to policing and punishment in many countries.

The final chapter is called ‘Hope’, a virtue it suggests should be aspired to. I found this a compelling but depressing book, however. As it points out, although we can try to become more self-aware, stereotyping is an inescapable part of human psychology, like so many other psychological heuristics. It is a means of partitioning the complex environment into categories, to aid understanding and our ability to function effectively. My conclusion after reading Shadows of Doubt is two-fold. One, the US is truly exceptional, and not in a good way. I have no idea how that country can escape from its ‘cold’ civil war, which the current presidency is anyway heating up. After all, the injustice of the US ‘justice’ system has been often described.

Two, for the rest of us it is a question of constant vigilance if individuals are to be protected, or to win justice, difficult in fearful and uncertain times. And at this moment the police and criminal justice systems are widely adopting algorithmic decision processes, automating decisions we know to be flawed – both ineffective and unjust. It is not the algorithms that are biased, nor their technical creators, but the system into which they are being inserted. The system needs fixing before it gets automated. 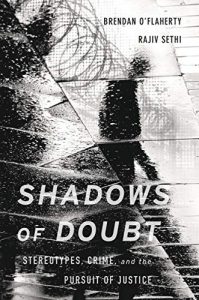 One thought on “Stereotypes and (in)justice”