I’m way behind in posting about what I’ve been reading, not least because I’m mid-prrofreading my next book (Market, State and People: Economics for Public Policy, out in early 2020 from Princeton University Press, since you all ask….). One of the recent reads was John Boughton’s Municipal Dreams: The rise and fall of council housing. It’s a particularly timely book as the UK is in the midst of its most severe housing crisis since the post-war years when the populaiton was growing and much of the already poor quality housing stock in cities had been damaged or destroyed. The context is different now of course, but there is nevertheless significant excess demand and huge generational injustice – not to mention that the UK housing market serves a special role of macroeconomic dysfunction.

The book is more or less chronological, telling the story of housing provision at increasing scale by local authorities from the late 19th century to the Thatcher government and then the sale of housing and turn to housing associations as (partial) replacements for council provision. It covers the debate about the architecture of big estates – the controversies about brutalist 1960s tower blocks, the role of that architecture and the giant estates in emerging social problems. Above all, it highlights a key conflict of purpose: was council housing housing for all, or housing for those most in need? If the latter, as governments increasingly came to consider, then perhaps the emergence of “problem” estates was about the wider economic problems rather than the estates or their inhabitants.

The book advocates a return to housing provision at scale by local authorities, although it doesn’t get into policy design. I agree this will be needed. People are less and less able to work in the cities where economic activity of highest value is increasingly concentrating – agglomeration effects seem to be accelerating (see David Autor’s ASSA talk on this). The UK is hobbling its future productivity and ensuring the macroeconomy remains vulnerable to instabilty from house prices. The private market has no incentive to fix the problem as housbuilders and incumbent owners do not want price growth to halt. The state will have to step in & local authorities should be allowed once again to build homes at scale, borrowing against future rents to do so if need be. 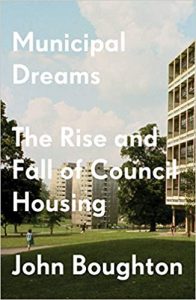 2 thoughts on “Houses for the people”