It’s always a mistake to go on holiday, although we had brilliant sunshine for 3 days of walking in the Lake District (for those who know the Lakes, 3 days without rain at all is quite something). While there, I popped into Westwood Books in Sedbergh, a second hand book emporium with a small but high quality economics section. I picked up three titles, including D.M. Winch’s classic little (1971) Analytical Welfare Economics. My Public Policy Economics course has the basic welfare theorems as the scaffolding off which the material is hung; it’s non-technical but not easy. After all, these are hard problems. The Winch book (I think I read it once in the 1970s) is largely non-technical too, whereas many textbook treatments quickly become very technical. I think covering the materials without scary algebra is important for students who come from a range of economics, politics and other social science courses – with varying levels of technical/mathematical background –  and many of whom will go into policy-type jobs. However, the Winch book is also pretty abstract. As I’ve not found the ideal textbook to use in my undergraduate teaching, I’ve now decided to write it myself. 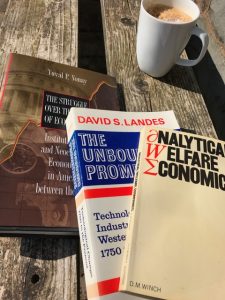 Meanwhile, I’ve also been reading the utterly brilliant Other Minds: The Octopus and the Evolution of Intelligent Life by Peter Godfrey-Smith. I’m interested in a dilettantish way in animal intelligence because of thinking about human economic decision-making. Pigeons and rats in some circumstances make the choices that would be predicted by economic constrained optimisation models (although as Cecelia Heyes has emphasised to me, this doesn’t mean they’re behaving like humans – the similarity stems from context not deep behavioural or genetic common factors). So do humans, of course, sometimes act like rational, optimizing homo economicus. Understanding the contextual determinants of how choices get made (by any creatures) seems crucial. Anyway, it turns out the octopus and the cuttlefish are pretty smart and – to anthropomorphise shamelessly – also rather human in their occasional stroppiness. Other Minds is simply superb, not just for its insights into the world of ‘cephalod-inclined hobbyists’. It’s lucid, thought-provoking, fascinating, funny. The key message I’ve taken so far is the importance of the feedback from actions to sense perceptions and hence to ‘consciousness’ or ‘intelligence’ – which, like any feedback loop, can reach a tipping point after which change becomes eponential. Best book of the year so far. And I say this having also read Thus Bad Begins by Javier Marias in the Lake District. 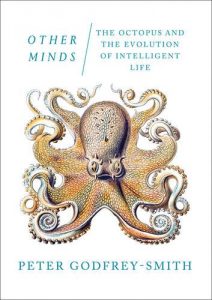