Very late in the day, I’ve finally read Barry Eichengreen’s Hall of Mirrors: The Great Depression, The Great Recession and the Uses – and Misuses – of History. The subtitle is a concise capsule summary. The book does a neat job weaving between the 1920s/30s and the 2000s, underlining the similarities and the significant differences. There is some nice storytelling as well, particularly in the Great Depression chapters, using colourful figures and their exploits to draw in the reader, starting with the notorious Charles Ponzi but with many others too. In fact, there’s a 20 page Dramatis Personae, so this is no abstract text but a story of actual people doing actual (bad/stupid/short-sighted) things.

Given the number of books already available about both episodes, the added value of this one needs to be in the compare and contrast, and I think it succeeds in this. The common features (apart from human frailty) lie in the dynamics of bubbles, and their roots in periods of stability and optimism; in the global character of financial market reactions and the way decisions that seem either sensible or politically necessary in one country can have immense negative externalities for others; and in the interplay between politics and economics or between democracy and technocracy. Perhaps the most important difference emphasised here is the greater scale and complexity of financial markets now. Even when people are not trying to hide misdeeds, it is not easy to identify dangerous flows or accumulations of risk.

But the book also points to the difference in policy responses: in the Great Depression the answer was more government. Given the way politics has moved, it was not the answer to the Great Financial Crisis. Eichengreen – relatively gently – points to the under-regulation of big banks and other financial institutions in key dimensions, such as the only modestly higher capital ratios and lower leverage; or the failure to reform credit ratings agencies. This gently touch, he argues, reflects the success of the monetary and fiscal policy action to avert another Great Depression: “Thus the very success with which policy makers limited the damage from the worst financial crisis in eighty years means we are likely to see another such crisis in less than eighty years.

Much less, I’d say, given how little has changed.

Anyway, I enjoyed Hall of Mirrors. I think it helps to have read other books on both episodes, as in effect half a book on each of the Great Depression and the Financial Crisis is pretty compressed. A combination of Liaquat Ahamed’s Lords of Finance and John Lanchester’s Whoops! would be perfect preparation (the latter was IOU in the US). 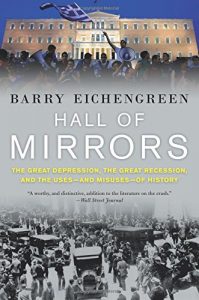