There’s an interesting new book, Digitalization, Immigration and the Welfare State, by Marten Blix of Sweden’s Research Institute of Industrial Economics. It brings together two deep trends, technology and immigration, in the context of the relatively rigid labour market structures of Sweden and some other European countries. Blix asks, what are the implications for the welfare state, the high tax, high spend social contract? He argues that the combined trends are increasing inequality, and the longstanding social support for redistribution and high taxation is eroding. Sweden has been at the forefront of both trends. It ranks high on measures of digitzation, and has taken in more refugees per capita than most other European countries. It has consequently had one of the biggest increases in income inequality in the OECD (the level of inequality is still relatively low – similar to Canada or Germany).

Ultimately, the book suggests a Swedish model of social democracy can potentially survive, thanks to the country’s high productivity and high initial levels of social capital. Sweden’s public finances are also in better shape than in many other countries. However, it certainly doesn’t look like an easy path. Absorbing the new immigrants will require a focus on enhancing their skills – and also those of the already-resident. One prescription is reducing the rigidities in the labour market and housing market. Another area where greater flexibility will be needed is in accommodating the increase in work – via digital platforms for instance – outside the traditional collective wage bargaining. Some Swedish unions are apparently working to establish employment standards on the digital platforms.

As the book concludes, however, the obstacles to the reinvention of the Swedish model – or any other social contract – are not problems of economic analysis but political obstacles. Economists often talk of the need for ‘structural reform’ when this is code for ‘politically bloody difficult.’ Immigration makes the politics harder, Blix argues: “Sweden is no longer the homogeneous country it used to be and the social contract holding people together is at risk of disintegrating.” All the more dangerous, then, he says to pretend everything is fine and nothing needs to change. The newcomers have to be brought into the fold or the future of the Swedish model looks to be in doubt.

Much of this debate is of course familiar to those of us more familiar with the UK and US economies, as is the kind of political lunge to the populist right or left that accompanies these tech and migration trends. It’s interesting to read about the challenges in the context of a country that has so long been an admired model for the centre left (and even some of the centre right). I accept that it’s essential to try the kind of policy response the book suggests, hard as that is, given the do-nothing alternative. But it’s quite hard to feel optimistic these days. Even Sweden! 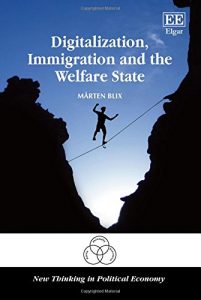